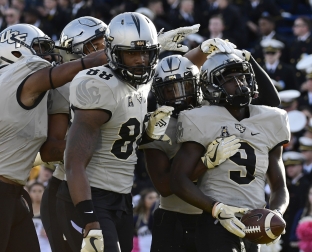 College football: Off to best start in program history, UCF has lofty expectations

The Knights are 6-0 for the first time in school history, ranked 18th in the country and looking the part of a formidable non-Power Five conference title contender.

Lost in the significance and pageantry of Saturday’s American Athletic Conference road win at Navy is that the Knights became bowl eligible — an accomplishment that last year caused quite a celebration around the program. But that was when UCF was coming off a 0-12 campaign.

This time around the Knights have loftier aspirations than merely being bowl eligible.

“Yeah, we get to go to a bowl game but we have bigger things to accomplish,” UCF senior right guard Chavis Dickey said. “We want to win the conference, go to a good bowl game and stuff like that.”

Second-year coach Scott Frost seemed almost surprised to hear Monday that the Knights are bowl eligible. Maybe that is partly because Frost is so locked in on this week’s opponent, Austin Peay, or perhaps because the current path the Knights are on could land them the AAC championship, a top-10 ranking and in a New Year’s Six bowl game.

After beating Navy 31-21 in their closest game of the season, the Knights and 17th-ranked USF appear to be on a collision course to meet as undefeated top 10 AAC teams in their regular-season finale on Nov. 24. As far as UCF is concerned, there are too many potential pitfalls in their next four games to even begin to think about a possible showdown against the Bulls.

“They’re taking it 1 week at a time, but in the back of their minds, I think they have bigger goals than to just make it to a bowl game.” pic.twitter.com/24Dq9cq3rb

The Knights insist they aren’t overlooking any team, especially FCS-member Austin Peay (5-3). The Governors were an in-season addition to the schedule after UCF’s home game against Georgia Tech was canceled due to Hurricane Irma in September.

“We respect them,” UCF senior defensive end Tony Guerad said of Austin Peay. “We know they are going to come in and play hard and we’ve got to play harder.”

The Governors have lost their two FBS games this season, which includes a 26-14 season-opening loss to Cincinnati of AAC and the only opponent they have in common with UCF this season. The Knights thumped Cincinnati 51-23 in a game that went only three quarters due to weather earlier this month.

Frost, who has managed to keep his team focused only on what is directly in front of it, said not looking ahead to next week’s game at SMU is more important this week than any other.

“This is a big game for us,” said Frost, whose team was originally scheduled to have bye this week before scheduling Austin Peay. “Anytime you’ve accomplished what we’ve accomplished to this point the last thing in the world you want to do is have any kind of letdown. This is a team that I think is a really good FCS team. They gave Cincinnati everything Cincinnati wanted early in the year.

“We’ve got to approach this just like any other game and that’s the way our kids showed up to practice.”

This article was written by Terrance Harris from The Associated Press and was legally licensed through the NewsCred publisher network. Please direct all licensing questions to legal@newscred.com.