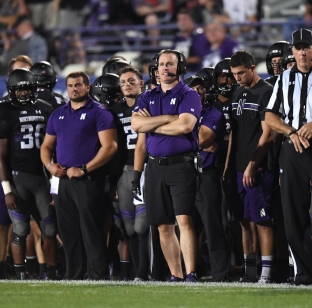 College football: Northwestern, CCU, Alabama talk importance of being among programs with most grads

Here come the Northwestern Wildcats, and it’s going to take a while to count all the graduate students in uniform. Eighteen of them, more than any college football team in the nation.

“I think it starts with recruiting,” coach Pat Fitzgerald said over the phone. “They come from great families that value education and obviously see this as a 40 or 50-year decision to be here at Northwestern, not just a four or five-year decision to play football.”

Here come the Coastal Carolina Chanticleers, and they have a gaggle of grads, too. Seventeen. Nothing new about that, though, since there have been 48 since 2012. The coach, with one of the most unique resumes in the profession, used to work on Wall Street. Joe Moglia knows how to read the market. He knows how to graduate players, too.

“I feel great about it, but I expect that, based on our philosophy and based on our standards,” he said, as he takes a five-month medical sabbatical to deal with a bronchial asthmatic reaction. “It’s not an accident these numbers are what they are.”

Here come the Alabama Crimson Tide. The “A” on Nick Saban’s cap might as well stand for Always at the top of the polls. Always among the leaders in graduates on the field, too. Twelve this season, including six starters for the top-ranked team. When the Tide played for the national championship game last January, they had 21.

“I think we’ve had 101 players in the last four years play in their last game, whether it was a playoff or a bowl game, with a degree,” Saban said via email. “That means we have a lot of guys that are graduating in three-and-a-half years, which I think is a real positive for them, whether it’s to go to graduate school or graduate so they can continue a career in football if they have an opportunity to do that.”

The landscape in many places is coated with sheepskin. According to a study by the National Football Foundation and College Hall of Fame, 971 graduates were on rosters when the season started. Twenty Division I schools had at least 10 – including the No.1 teams in both the FBS and FCS, Alabama and James Madison.

Northwestern was ahead of them all, and Fitzgerald sees it as a big plus for his program.

“You hope when you’ve got this number of guys who have been through the undergraduate experience, they’ve got a lot of wisdom they can share with their younger teammates,” he said.  “They’ve got a maturity about them, they’ve got an understanding of how the whole thing works, how to manage their time.”

Excellence in the classroom, in competition & in the community.

Meanwhile Coastal Carolina has moved from the FCS Big South to the FBS Sun Belt, and has taken its glittering graduation numbers and perennial conference-leading Academic Progress Rate with it.

“There are a couple things we literally do that no one in the nation does,” Moglia said.

“With the possible exception of the military academies, probably the only program in the history of college football whose entire football team voted was Coastal Carolina last November.”

Our players got the opportunity to spend time with some local kids in the community. #BAM pic.twitter.com/2Rge0ZJqFy

His No. 2 . . . “I’m pretty sure we’re the only program in the nation that literally we have no rules. None. Zero. But we do have a standard. The standard for us is to stand on your own two feet, take responsibility for yourself, treat everyone with respect, accept consequences for your actions.”

He calls it BAM. Be A Man. “It’s the whole standard we run the entire program on,” he said. “A piece of that is a commitment to do the job you’re supposed to do in the classroom.”

The broad view of the world comes directly from Moglia. Who else out there can say they spent 16 years coaching football, then more than two decades on Wall Street, then returned to the sidelines and film room?  What other coach can say he went into this season 51-15 on his current job, after working 17 years at Merrill Lynch – starting in a training program that had 25 MBAs and one football coach — and then CEO at TD Ameritrade?

“You have to win. If you don’t win you’re out of credibility. Our record speaks for itself and that’s important,” he said. “But there’s another piece to this. Whether a guy gets to the NFL or not, football’s going to come to an end. If you’re good enough to get to the NFL, we’ll get you to the NFL, but we’ve got to do more than that for our guys.”

Moglia does things such as reaching out to the teacher of a recruit’s worst subject in high school, to see what happened.  “A kid who’s not going to go to class, I don’t want them. I don’t care how good they are, I don’t want them,” he said. “Eventually he’s probably going to disappoint the team.”

“The key to the drill is that we want to help players be more successful in life,” Saban said, “so it’s very important that they develop the right character as people, but it’s also important they develop a career off the field. The No. 1 thing is that when they graduate, that stays with them forever. That’s a 40-year career.

“Academics are important to us and also important to our players. We sell that part in recruiting so I think we get players here that are serious about going to school.”

A football game is not a written test. But that many grads in shoulder pads can’t hurt.