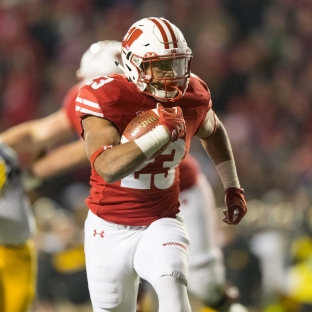 College football: No. 5 Wisconsin remaining calm and focused as Badgers climb in the rankings

MADISON, Wis. — Prod Wisconsin players with enough questions about the College Football Playoff and you might crack the fifth-ranked Badgers’ “next-game-only” armor.

The next most impressive accomplishment thus far for Wisconsin under coach Paul Chryst — aside from its unblemished record — is that the team hasn’t cracked under pressure as attention mounts with each victory.

Shake off the turnovers and finish games strong on offense. Fill in the injury-created holes on the nation’s best defense with a capable backup.

And as the chatter gets louder about the postseason, keep a laser-like focus on just the next game.

“We’re kind of lucky, we just kind of live in our own world, at least me personally,” right guard Beau Benzschawel said this week before the latest playoff rankings were released. “We just really go about our business and … really (focus) on the now and what we can do to control now.”

Barry Alvarez is a “pretty boy”?!

That answer could have been taken right out of a Chryst-written script. The unflappable coach is preparing the Badgers (10-0, 7-0) for their toughest test yet this season: a Saturday visit from No. 24 Michigan (8-2, 5-2).

“You know the thing I always used to look at, what I talked about with the team, I’d usually go in with a theme each week,” said athletic director and former Wisconsin coach Barry Alvarez. “And if about Wednesday, I start seeing … quotes from players that are my quotes to them, my message to them, then I know I’ve got them.”

Does Alvarez, who laid the foundation for the program’s current success, see the same impact from Chryst?

This is not that unusual for successful teams. But this year, especially, the blue-collar Badgers seem to embody their leader with the “coach-next-door” personality.

RELATED: How the top 11 teams can make the College Football Playoff

Chryst doesn’t like attention. He’d rather deflect any praise to his assistants and players. When he gets a question about a key player like star freshman Jonathan Taylor, Chryst is quick to remind others of the contributions of the offensive line or the down-field blocking by receivers.

There is rarely, if ever, anything close to bulletin board material from Wisconsin. All Chryst has done since returning to Madison as head coach is win — a 31-6 record over the past three seasons going into the weekend. He is just the third head coach in Big Ten history to win at least 10 games in each of his first three seasons, joining Ohio State’s Urban Meyer and Michigan’s Fielding Yost.

“It’s the kind of the foundation of this place,” Rudolph said about the Badgers’ ability to focus and get past mistakes. “It’s about hard work. It’s about doing the right things, the details. Smart, tough dependable. It’s all the things that really aren’t cliché.”

The Badgers have had problems with slow offensive starts and early turnovers all season. It happened again last week when the Badgers had four turnovers, including three interceptions thrown by Alex Hornibrook, but finished strong in closing out a 38-14 rout of Iowa.

Chryst can light into his team when needed, like during halftime of what turned into a 59-10 blowout of the season opener against Utah State.

Troy Fumagalli has been named 1 of 4 finalists for the Burlsworth Trophy pic.twitter.com/DIdiJ9JLze

There’s has been a lot to be happy about so far this year. Three more wins and the Badgers may get a chance to fulfill their dreams of playing for a national title.

Not that they’re looking that far ahead. Chryst won’t allow it.

“I think we’re a very good team,” Benzschawel said. “We’ve just got to keep proving ourselves these next few weeks and we should be in the position we want to be in.”

This article was written by Genaro C. Armas from The Associated Press and was legally licensed through the NewsCred publisher network. Please direct all licensing questions to legal@newscred.com.