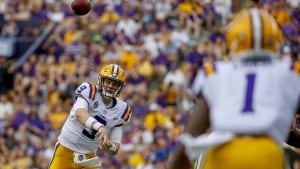 College football: No. 12 LSU unhappy with passing game as No. 7 Auburn looms


BATON ROUGE, La. — Preseason talk about LSU relying more on its passing game this season has transitioned into a search for explanations about why that hasn’t happened during the 12th-ranked Tigers’ first two games.

New quarterback Joe Burrow has completed fewer than half of his pass attempts for 291 yards so far. LSU might be in trouble if not for the emergence of senior running back Nick Brossette, who has eclipsed the 100-yard mark in victories over Miami and Southeastern Louisiana.

It was good to be back in Death Valley on a Saturday night…
The Tigers are 2-0! pic.twitter.com/cBFQwTtVxF

But a good ground game might not be enough on Saturday against No. 7 Auburn, which is allowing 75 yards rushing per game. Washington barely averaged three yards per carry in its season-opening loss to Auburn.

“We need to improve our pass protection and our overall passing game,” LSU coach Ed Orgeron said on Monday. “We’re going to make some adjustments to do that. There were some technical errors on the line. Our receivers have to improve their route-running and catching. Then, Joe held on to the ball too long a couple of times.”

The Tigers were without both their starting tackles against Southeastern on Saturday — Saahdiq Charles and Adrian Magee. Charles, who was not on the sidelines last week, will be back for the Auburn game, Orgeron has said. Magee, who suffered a foot injury in the opener against Miami, will not be in the lineup.

Badara Traore, who has stepped in for Magee at right tackle, had his problems against the Lions. In addition to struggling in pass protection, Traore was called for two holding penalties and a false start. Austin Deculus, who replaced Charles, will practice on the right side, like Traore, ideally giving LSU more options at that spot heading into the Auburn game.

“He will compete with Badara this week and we will see who’s the best,” Orgeron said. “Auburn has a big, physical and fast defensive line. They penetrate the backfield. They use their hands to get off blocks. To beat them one-on-one, you have to be a man.”

LSU rallied from a 20-point deficit to defeat Auburn in Baton Rouge last season. Left guard Garrett Brumfield is the only LSU offensive lineman who started in that game a year ago. But, Brumfield will not use the lack of experience as an excuse for the protection issues.

“To some extent, the lack of experience is a factor,” Brumfield said. “But, the guys we have playing are the guys we trust. These guys have to meet our standard at LSU. They have to play football. We have to play physical against Auburn. It is going to be a tough game.”

Burrow, a graduate transfer from Ohio State, has completed 48 percent of his pass attempts (21-of-44). He threw two touchdown passes and ran for one touchdown against Southeastern Louisiana.

“The sacks have been because of protection (breaking down) and my holding the ball too long,” Burrow said. “If the protection is not great, I have to get rid of the ball faster. If I have to hold the ball longer while someone gets open, the protection has to be better. I know Auburn has one of the best defensive lines in the country. We’ll see how we stack up.”

Burrow hurt Southeastern with his running ability when receivers were covered or when pass-rushers beat their blocks. A 13-yard run by Burrow set up a touchdown. Burrow refused to slide on those scrambles and took some vicious hits. Orgeron does not want his quarterback to put himself at such risk.

“I talked to coach Orgeron about sliding,” Burrow said. “I don’t know if I am going to do the Tom Brady baseball slide. Maybe, I won’t lower my head into four or five guys. I will take some hits off myself this week.”

This article was written by Bryan Lazare from The Associated Press and was legally licensed through the NewsCred publisher network. Please direct all licensing questions to legal@newscred.com.