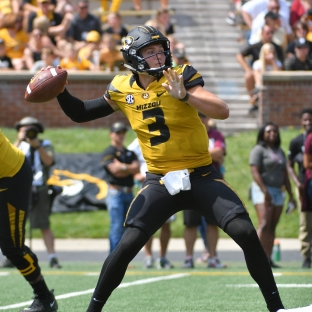 Sometimes in college football, it takes a team a few possessions or even games before they work out their kinks offensively and get into a steady rythym.

That was far from the case Saturday afternoon in Columbia, Missouri at Faurot Field at Memorial Stadium as Missouri topped Missouri State in a shootout 72-43 in each team’s season opener.

The Tigers and Bears each exchanged scores throughout the first quarter and into the second before Missouri scored 28 in the second frame to take a 48-35 lead into halfitme.

Here’s a breakdown of some impressive numbers in Saturday’s opener:

1,307 – Total yards combined between the Tigers and Bears.

815 – Total yards by Missouri’s offense (521 passing, 294 rushing), which broke a program record. Saturday marked the first time in school history that the Tigers eclipsed the 800-yard marker. Their previous record was 744 in a 69-0 victory over Western Illinois Sept. 17, 2011.

521 – Passing yards by Drew Lock. Lock’s impressive day with his arm broke two separate single-game school records; most passing yards by an individual and most team passing yards by a team. Lock only completed 21 passes, which is an average of 24.8 yards per completion. The previous team single-game record was 519 in Missouri’s 69-17 win over Nevada Sept. 13, 2008. Jeff Handy owned the previous single-game high when he threw for 480 yards in the Tigers’ 28-26 loss to Oklahoma State Oct. 17, 1992.

515 – Total yards by Lock. Lock shattered Missouri’s previous single-game total yards record after throwing for 521 yards, however lost six yards on his only rushing attempt. Brad Smith had the previous Tigers’ record where he totaled 480 total yards (246 rushing, 234 passing) in their 41-24 victory over Nebraksa Oct. 22, 2005.

Today’s also the first time in the modern era #Mizzou‘s had a 400-yard passer & 200-yard rusher in the same game. #MIZNotes#MIZ #ShowMe

72 – Total points scored by Missouri. The Tigers finished just shy of their 79-point record that they sent last year in their Sept. 24 victory over Delaware State.