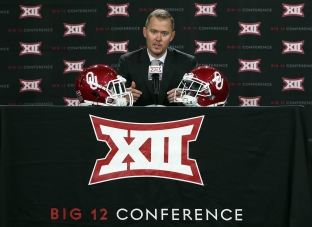 NORMAN, Okla. — While Mike Leach’s Air Raid offense was posting astonishing numbers at Texas Tech, he didn’t realize he also was helping mold a group of young coaches who would use the system to frustrate Big 12 defenses for years to come.

Leach’s former Tech quarterbacks are gaining prominence as coaches at Big 12 programs. Lincoln Riley recently was promoted from offensive coordinator to head coach at Oklahoma. Kliff Kingsbury has been the head coach at Texas Tech since 2013, and his offenses have been nearly unstoppable. Sonny Cumbie is entering his fourth season as TCU’s co-offensive coordinator, and his units with quarterback Trevone Boykin were among the best in college football.

All three were on the Red Raiders team that won the 2002 Tangerine Bowl. Kingsbury, the oldest, just turned 38.

Leach said he doesn’t think about it much — he’s still coaching at Washington State, where his system is now challenging Pac-12 defenses. Asked to reflect, his pride shows.

“I get asked once in a while about them,” he said in a phone interview with The Associated Press. “I got to work with some really quality guys. I’m thrilled they have gone on to have success.”

Riley, who will turn 34 in September, is the youngest coach in the Bowl Subdivision. His Oklahoma offense set an FBS record for passing efficiency last season, and the Sooners ranked second nationally in total offense and third in scoring. Quarterback Baker Mayfield and receiver Dede Westbrook were Heisman Trophy finalists.

This is just the beginning. #Sooners No. 7 in preseason @AP_Top25.

Leach has watched his pupils from afar, and at times, the 56-year-old mastermind has become the student.

“We will occasionally pick up the phone and call one another and draw stuff from one another and pick each other’s brain a little bit, so there is some crossover,” he said. “It all comes from the same basic offense we ran at Tech.”

Riley didn’t get on the field at Tech, and Leach offered Riley a student assistant position after cutting him in 2003. Riley made the most of his time with successful quarterbacks Cumbie, B.J. Symons, Cody Hodges and Graham Harrell.

“We had a lot of interesting characters in there,” Riley said. “The head coach, for first. That was interesting right off the top. A lot of dynamic personalities in there. It was good. There was a lot of learning. It was a unique environment to learn, but one that benefited all of us.”

Cumbie closely followed Kingsbury’s path and was ready to play when the opportunity finally came his senior year.

“Everywhere Kliff went, everything Kliff did, Cumbie did,” Leach said. “I think Cumbie’s focus, persistence and diligence doing that helped him get on the field and be the guy for a year.”

Though they all use the same basic system, there are differences. Last season, Washington State and Texas Tech passed nearly twice as often as they ran, staying true to the Air Raid roots. Oklahoma ran 14 more times per game than it passed last season and TCU had a nearly even split.

“He’s (Leach) had incredible success, but he’s always had his system and recruits guys to that,” Riley said. “He’s not going to tinker the system much — they are going to run what they run. Only the names and faces change. Our belief has been a little bit different here in that you do have to adapt to what you have. There’s two ways to do it well, and both groups have had a lot of success offensively.”

Leach used the system as offensive coordinator at Oklahoma in 1999, and he helped Riley get onto former Sooner coach Bob Stoops’ staff in 2015. Leach is pleased that the system he helped develop under Hal Mumme has continued to grow through the players he coached and beyond.

“Just in general, what we started doing there at Tech, Oklahoma, has spread quite quickly — high schools, all the rest, and even the NFL for that matter,” Leach said. “I think a number of these guys did work with us, and it did help us in the offense and then provide them with opportunities. It turned out pretty good for everybody, I think.

This article was written by Cliff Brunt from The Associated Press and was legally licensed through the NewsCredpublisher network. Please direct all licensing questions to legal@newscred.com.