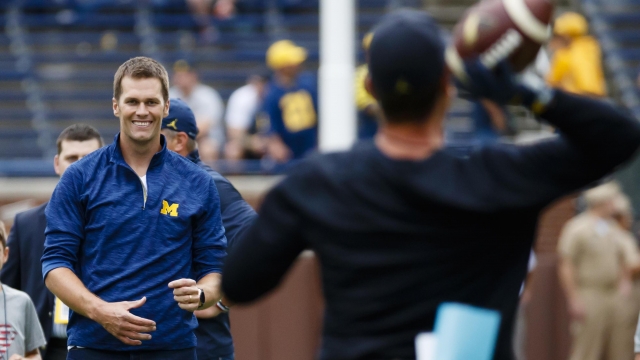 Once upon a time, before there was such a thing as the College Football Playoff, before there even was the BCS, there was — well, a system eternally one step away from chaos in the polls, and raging controversy in the public.

It is the final week of the 1997 season, and there is restlessness in the land of college football. The BCS, designed to create law and order by putting the two best teams together at the end, is one year away.

Michigan is No. 1, headed for the Rose Bowl against No. 8 Washington State. The Wolverines are 11-0, led by Heisman winner Charles Woodson on defense and quarterback Brian Griese, who has been so good and so durable, his backup has thrown only 15 passes all season. A junior named Tom Brady.

How good are the Wolverines? Thirty-one players off the roster will one day play in the NFL.

“As I look back 20 years, we had so many great football players on that team,” then-coach Lloyd Carr says from the vantage of 2017. “At the time I wasn’t tuned in to any of that.  I was thinking about the next game. It was just a bunch of guys that had great talent and great leadership. They cared about winning. The chemistry was something really special.”

Nebraska is 12-0 and No. 2, preparing to play No. 3 Tennessee and Peyton Manning in the Orange Bowl. The new bowl alliance has created the match, but can’t set up Nebraska with Michigan, since the Big Ten and Pac-10 are tied to the Rose Bowl. The Cornhuskers had been on top of the polls, until an overtime 45-38 escape over Missouri in November had cost them votes. No. 4 Michigan ripped No. 2 Penn State 34-8 the same day and sped past in the rankings

The Orange Bowl is to be the last college football game for Nebraska’s Tom Osborne. He took his first job with the Cornhuskers as a volunteer assistant, his only pay the right to eat at the training table. Now he is retiring as head coach, having lost but 49 times in 25 seasons.

Scott Frost is the Nebraska quarterback in 1997. Twenty years later, he would be speaking as Central Florida’s head coach.

“That season was meaningful for a lot of reasons. Nebraska had won two championships in ’94 and ’95, and then we went 11-2 in ’96 and people kind of acted like the sky was falling. So there were a lot of people hungry to recapture the title. We didn’t know Coach Osborne was going to retire until the end of the season so that certainly made us play harder at the end.”

Michigan is trying to end a half-century of chasing a national championship. Nebraska had just won two of them in 1994 and ’95. All in all, it sounds like a situation ripe for tumult.

Michigan had to play first.

“I told our team, we’re going to be inundated with questions about the national championship,” Carr said of the buildup to the Rose Bowl. “What we need to do is go out and play our best game. We know what we’re playing for, we know what the stakes are. But let’s try to keep the conversation on what we need to do to win this game.”

Honoring player requests, he tried something different to separate practices from final exams. Michigan worked out rarely in Ann Arbor, but then spent two weeks in California, having two-a-days for nearly a week in Dana Point, south of Los Angeles.

On Jan. 1, Michigan huffed and puffed and finally pushed past Washington State 21-16. The victory secured an unbeaten season, and that’s a lot. But it was not exactly a resounding closing argument.

At the suggestion of his sports information director – who had an eye for the voting campaign to come in the next 30 hours – Carr allowed television cameras into his post-game locker room for the first time, to broadcast his comments to his team.

“So across the country, here I am telling our team, that we had just won the national championship,” he said.  But on the other side of the continent, the Nebraska Cornhuskers sensed a door left ajar, at least in the coaches’ poll. The Associated Press media poll, they figured, was a lost cause.

“There was such national sentiment toward Michigan,” Frost said. “I think that’s just natural. Nebraska had won two championships in the last three years. Michigan had kind of been their darling that year. I think a lot of the country had kind of taken for granted the fact they were going to be the national champions. I think going into the game we felt like we had a lot to prove.

“We watched the Rose Bowl as a team and watched them squeak one out against Washington State and maybe that gave us a little more hope that if we had a dominating performance, we could turn the tide.”

The next night, Nebraska smashed Tennessee 42-17.  Manning threw 31 passes, Frost only 12. But Frost had only nine fewer yards through the air, as the Cornhuskers defense made life miserable for Manning in his last college game.

Osborne had given strict rules leading up to the game: No campaigning in the press.

“Coach Osborne wouldn’t let us talk about it,” Frost said “He wanted us to go about our business and try to win a football game. But we all knew what the situation was.”

But after the rout, with the issue now left to the voters, the muzzle was off.

Frost that night: “Barring a miracle, the AP has given it away. I have a question for all the coaches . . . if you can look yourself in the mirror and say if your job depended on playing either Michigan or Nebraska to keep your job, who would you rather play? The second point I have is, any coach outside the Big Ten or the Pac-10, if they were undefeated, they would expect to share the national title. It’s been split before. It’s OK to split it.”

Frost was followed by defensive lineman Grant Wistrom: “If anybody in their heart can honestly find (a reason) not to vote us No. 1, that’s their problem. If you’re going to give it to Michigan because they haven’t won in a 45 years, then who cares, we don’t want it, anyway. If you want to vote for the best team in the country, vote for us.”

Watching from a hotel in Los Angeles, where he had stayed to recruit, Carr had his first misgivings. “(A split) never entered my mind, until I watched the game,” he said. “Scott Frost went on and made a great pitch for Nebraska.”

About an hour later, Carr said his phone rang. A Michigan reporter had news. The Associated Press had gone for the Wolverines as expected, by 33 points. Of the 70 voters, 51 had voted Michigan, 18 Nebraska, and one split.

RELATED: 50 storylines and questions heading into the season

He remembers it being 20 minutes later and the phone rang again. Same reporter. More news. Nebraska by four points in the coaches’ poll. And there was something else.

“He said, `There’s something that’s going to bother you,” Carr said. “As the voting tallied out, either two coaches voted us third, or one coach voted us fourth.

“That was really disappointing.”

Nebraska’s players had gathered in a ballroom at a Miami hotel to celebrate the bowl victory, when they got the word in the wee hours of the morning. They had won a share of the national championship, by the width of a cornstalk.

“The room erupted,” Frost said, who can still shudder at the thought of a 13-0 Nebraska team with no title, and Osborne going out on such a note. “It would have been devastating, and I think frankly, it would have been wrong.  It should have been split.

“’I’m thrilled now by the fact that we were able to send such a great man and great coach out with a title.”

Twenty years later, both sides cherish their slices of a championship, but each have some regret.

“To be honest, it was a shame. We would have loved to have had a chance to decide it on the field,” Frost said.  “It was a strange situation, and probably very ironic, but also fitting for the end of the non-playoff era.”

As for Carr, he still doesn’t know if someone voted his team fourth, or two coaches voted the Wolverines third. “There’s a writer here in Detroit who worked hard to find out. There’s all kind of speculation. I voted on the coaches poll. I said if I voted Nebraska fifth, we would have won. I voted them No. 2. If somebody voted us fourth, that clearly . . . well, it’s disappointing from the standpoint of the vote.

“All those things were discussed for awhile, but we won the national championship. What Nebraska did was fine for them. You just go on. You move on. We all knew, we all know even now, it’s not a perfect system.”

But he was glad the day the coaches’ association declared that all future ballots had to be public. Still, the split hasn’t haunted him into the next century.

“It’s unbelievable, the irony of this. The last Michigan team that won the national championship was in ’48 and they were having their reunion in Pasadena,” he said. “We had a breakfast one morning with them, and we had a picture taken at the Rose Bowl with them. There were so many great things about that game. It was a glorious period. So I try to tell our people here there’s too much to be happy for to be disappointed to any extent. There’d been co-championships before. It’s not something I dwell on.”

The BCS arrived the next season, designed to eliminate such dilemmas.  Well, almost.  In 2003, there were three one-loss teams at the top of the polls, and only two spots in the BCS game. LSU beat Oklahoma for one piece of the title, and USC rolled in the Rose Bowl for another. History will see that as the last split, but each of them had a blemish on the record.

Michigan and Nebraska of 1997 stand alone. They will forever be the last perfect teams to say “We’re No. 1,” and look over their shoulders to find someone else saying the same thing.