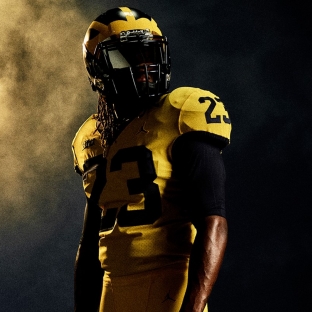 ANN ARBOR, Mich. — The University of Michigan and University of Florida football programs will wear special uniforms for their match-up in the AdvoCare Classic held this Saturday, Sept. 2, at AT&T Stadium in Dallas, Texas. The Wolverines’ apparel provider, Jordan Brand, and the Gators’ provider, NIKE, have teamed to create special uniforms that simultaneously express the heritage and future of each program.

Michigan will wear a new all-maize uniform in celebration of the University of Michigan Bicentennial and in honor of the 150-year anniversary of the school’s official colors: maize and blue. The team will wear its traditional maize pants that have been worn in home games for nearly a century.

Florida will wear a flooded blue uniform with all blue accessories in a subtle change from the program’s traditional look.

This is the second time in school history that Michigan has worn a maize jersey. The program donned a maize jersey with blue numbers against the U.S. Naval Academy in 1928.

The Wolverines are wearing an alternate uniform for the sixth time since the 2011 season. It will be the first time that U-M has worked with current apparel provider, Jordan Brand, on a special uniform.

In addition to unveiling the all-new maize Wolverine uniform, Jordan Brand is debuting a University of Michigan edition of the Jordan Trainer 2. The football jersey and shoe hit retail locations on Wednesday, Aug. 30.

Fans can purchase the replica maize jersey in youth and adult sizes at local area M-Den locations starting at 9 a.m., or online at mden.com starting at 10 a.m. The Jordan Trainer 2 shoes will be on sale exclusively at the M-Den’s South State Street location and online.

Get the new @UMichFootball @Jumpman23 Maize Alt Jersey and Trainer 2 shoes August 30 starting at 10:00 AM ET on https://t.co/JarJTDmNYw pic.twitter.com/sanOMI8xoY

The M-Den will also have popup locations in Dallas this week, beginning Sept. 1 at the Omni Ft. Worth Hotel from 9 a.m. until 5 p.m. CDT. On Sept. 2, Michigan gear will be available for purchase starting at 11 a.m. CDT, as part of the Alumni Association Territory Season Kick-off Event (ticket required) held at the Arlington Convention Center. The M-Den will also have a stand at AT&T Stadium inside the East Plaza.