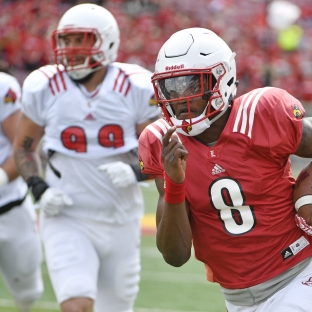 Gary B. Graves | The Associated Press

Then came three straight losses in the midst of collecting all those trophies, a frustrating slide that featured sacks, turnovers and signs the Cardinals junior still had work to do.

Jackson spent the offseason addressing those flaws and has returned bigger, stronger and wiser, all necessary things as he finds new targets to throw to.

“I feel like I’ve matured,” Jackson said Thursday. “I feel like I’m growing on a collegiate level, and hopefully I’ll keep going.”

That’s a scary prospect, considering the 6-foot-3, 212-pound Jackson broke multiple records and compiled a boatload of highlights while amassing 5,114 offensive yards and 51 touchdowns in 2016.

Louisville quarterbacks coach Nick Petrino said Jackson has shown his maturity while learning to work under center this season. While the shotgun remains an obvious option to use his talents, the goal is broadening his game from a different perspective.

“There was never a problem with him taking snaps. He was always able to do that,” said Petrino, the son of Cardinals head coach Bobby Petrino. “It was more the footwork, the timing, all the little techniques and aspects of it. Now, he’s really good at it and we can do anything we want under center.”

One emphasis is improved ball security, which hurt Jackson down the stretch. The Pompano Beach, Florida, native fumbled once in each of the final three games, a stretch in which he was also sacked 22 times.

Petrino is stressing the importance of tucking the ball when Jackson runs, something the added strength could help.

Jackson’s mission this month is bonding with a bunch of targets.

See all the action from the Cards return to the practice field. #L1C4 pic.twitter.com/3T8BdB9uJW

“There are some guys that have shown through the weight room, spring ball and summer workouts that it’s time for them to grow up and go,” Galloway said last week.

Eagerly helping that process is Jackson, who has a chance to become only the second repeat Heisman winner and first since Ohio State’s Archie Griffin (1974, ’75).

RELATED: 8 non-conference college football matchups to look forward to in 2017

Like last year, Jackson is determined to take the next step and help Louisville win an Atlantic Coast Conference championship. Better decision-making and mechanics will help, along with blending with players he hopes will allow him to spread the wealth again.

“They know their plays, they run their routes very good, they’ve got great hands,” Jackson said. “It hasn’t been hard at all.”

This article was written by Gary B. Graves from The Associated Press and was legally licensed through the NewsCred publisher network. Please direct all licensing questions to legal@newscred.com.