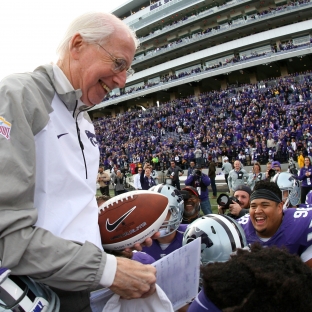 MANHATTAN, Kan. — Bill Snyder likes to spin a well-worn story about an old man from western Kansas, who had driven through the night many years ago to visit Kansas State’s coach after a victory in the Copper Bowl.

Snyder was in the early stages of turning around one of the worst programs in college football, what became known as the “Miracle in Manhattan.” And the man was so appreciate of Snyder that he patiently sat in his car outside the coach’s office awaiting his early morning arrival.

They chatted about family and life. Hopes and dreams. Then, the man said the Wildcats’ bowl victory was “the greatest experience of my life,” words that stick with Snyder to this day.

“That,” Snyder said, “made me understand what this all means.”

Just imagine how thankful that man would be these days, after nearly 25 years interrupted by a brief retirement. The Wildcats have been a perennial Big 12 title contender and bowl participant, and a program that was once a national laughingstock has triggered a university-wide renaissance, marked by a campus building boom, enrollment increases and alumni pride.

The 77-year-old Snyder’s name now adorns the football stadium, where about $200 million in recent renovations have turned it into a jewel of the Flint Hills. The Hall of Famer’s life-sized statue stands sentinel at the front gates, and a short drive away is a highway bearing his name.

His shadow falls heavily across the entire Big 12.

Indeed, all of college football.

“Last year I was in Scottsdale at an event,” new Baylor coach Matt Rhule recalled, “and my wife sat down next to a lovely lady, and she’s talking to her. She said, ‘You should meet her husband!’

“I looked over and it was Bill Snyder. It was Coach Snyder! I was frozen in fear.”

Snyder has that effect on people — a sense of awe and wonderment. Part of it comes from more than 200 career wins, achieved at an out-of-the-way school that rarely lands top talent. Part comes from the way Snyder has run his program, rarely finding his players embroiled in scandal. And part comes from the revolutionary offensive and defensive systems that he helped introduce to the game.

A big part, though, has to do with his longevity.

Snyder was hired at Kansas State in 1988, when new Oklahoma coach Lincoln Riley was 5 years old. Snyder will begin his 26th season on Sept. 2 with a team expected to once again contend for a title.

“The way in which he resurrected a program, or basically built it, is the thing that’s most interesting to me,” Kansas coach David Beaty said. “The guy to me is the picture of class. Everyone in our conference respects him.”

That respect has only grown this year, while Snyder was being treated for throat cancer.

The diagnosis came about the time the Wildcats were preparing for the Texas Bowl last winter, and chemotherapy began in January. Yet the normally debilitating rounds of treatment never slowed him. He was active throughout the recruiting process, presided over spring practice as if nothing was amiss and was back on the field when fall camp began a few weeks ago.

He’s received thousands of supportive letters, so many that he’s struggled to answer them all. The treatments did leave him drained from time to time, but he insists that he’s doing fine.

The biggest change? His ubiquitous cup of coffee has disappeared.

“I drink water all day. Between water and food, it’s driving me crazy,” Snyder said. “They give me X-number bottles of water every day, and I’ve had more water in the last four months than I’ve ever had in my entire life. I’ve also had more food placed in front of me in the same time period.”

Snyder has treated his cancer scare with self-deprecating humor, but the gravity of the situation caught even those closest to him by surprise.

The diagnosis and treatments were also the first signal that the seemingly immortal silver fox might just be fallible.

“It was wearing him down,” said Sean Snyder, his eldest son and associate head coach. “But when we got started and got close to going for fall camp, his energy was up and he was close to where he was always at before, and it’s really surprising at where he’s at compared to where he should be at.”

Perhaps that’s because where he should be is on the sideline. Snyder tried the retirement route in 2005 and it lasted three years. He simply couldn’t stay away, despite changes in major college football that have caused him much anxiety over the years.

“There’s a couple of us that when we’re together at meetings, we make sure we watch him,” Beaty said, “and we follow his lead just because he’s done it so well for so long, and you know he’s thought about it. When you get on a plane with him and you see a notebook about that thick” — Beaty’s fingers are several inches apart — “and he’s writing the whole time, you’re like, ‘OK, no wonder. No wonder.'”

Many believe this will be his final year, given his age and health, but Snyder continues to bat away such talk. He prefers to focus on the coming season, just has he has for nearly three decades.

For good reason, too. With a team that won nine games returning almost intact, he knows this season could be his last good chance to compete for an elusive national championship.

“I’m doing fine. Getting around fine,” Snyder insisted. “Don’t have any issues right now other than trying to prepare for the season. That’s always an ongoing issue. That’s 365 a year.”

This article was written by Dave Skretta from The Associated Press and was legally licensed through the NewsCred publisher network. Please direct all licensing questions to legal@newscred.com.