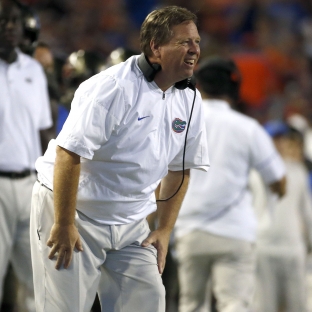 Randy Shannon will serve as interim coach throughout the remainder of the season.

“We want to thank Coach McElwain for his efforts in leading the Gator football program,” said Stricklin. “We are confident Coach Shannon will provide the proper guidance to the players and rest of staff during this time and we will begin a national search for the next head coach.”

The two parties are currently negotiating terms of separation.

Jim McElwain finished 22-12 during his two-plus seasons as head coach and was hired as the 25th head coach in UF history on Dec. 4, 2014.

McElwain won 22 games and two Southeastern Conference Eastern Division titles (2015, 2016) during his tenure at the University of Florida. Florida’s highest AP Poll ranking under McElwain was No. 8, a mark the Gators reached after their win over Missouri in 2015.

Shannon has over 25 years of coaching experience, serving as the head coach for the University of Miami from 2007-10 (28-22). During his career as a player and coach, Shannon has been a part of three national championship teams.

In his time at Florida, Shannon’s defenses have consistently ranked in the top-10 nationally. During his coaching career, he has tutored 59 players who have been selected in the NFL draft.