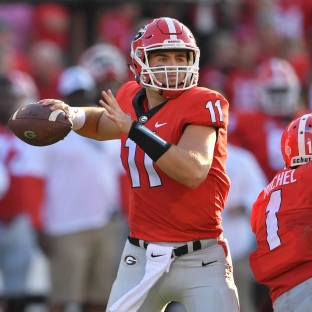 A bunch of key players, including several starting quarterbacks, were injured over the first big weekend in college football. Some have hopes of returning to the field soon. Some are out for the season.

Here are several players who will step into bigger roles in Week 2 to fill in for starters injured during Week 1:

Florida State can survive its season-opening loss to No. 1 Alabama. But the Seminoles’ season may hinge on their quarterback situation after starter Deondre Francois — who had one of the most prolific passing seasons in Florida State history as a redshirt freshman in 2016 — was injured in the fourth quarter of Florida State’s 24-7 loss. Francois was sacked from behind and injured the patella tendon in his left knee.

Jimbo Fisher: “James Blackman is the No. 1 QB.” pic.twitter.com/TmfzWwiege

Florida State coach Jimbo Fisher said Monday that Francois will have season-ending surgery, followed by four-to-six months of rehabilitation. True freshman Blackman will take over as the team’s starting quarterback, just the second time in program history a true freshman quarterback will start for the Seminoles. The team’s other quarterbacks are junior J.J. Cosentino, who has attempted 19 passes in five career games, freshman Bailey Hockman and walk-on Jake Rizzo.

The 6-foot-5 Blackman will get his first test at home against Louisiana-Monroe before Florida State hosts No. 16 Miami in its ACC opener in Week 3. The Seminoles dropped from No. 3 to No. 10 in the latest AP Top 25 Poll. The question now is whether or not they can regroup under Blackman and make a run at the College Football Playoff.

Luckily for Georgia and its fans, starting quarterback Jacob Eason hasn’t been ruled out for the season after suffering a knee injury in Week 1. But freshman Jake Fromm is expected to make his first start when No. 15 Georgia travels to South Bend, Indiana, to face No. 24 Notre Dame this weekend.

Prayers for #10 & prayers for the victory tonight! Great win tonight against a solid opponent. Ball is easy when surrounded by great players

Fromm performed admirably against Appalachian State after Eason left the game, going 10-of-15 for 143 yards and a touchdown. The good news for the Bulldogs’ offense is that they have two veteran running backs — Nick Chubb and Sony Michel — at their disposal. The pair combined for 31 carries for 183 yards and three touchdowns in Georgia’s 31-10 win against Appalachian State. They’ve combined for 1,000 rushes for 5,993 yards and 58 touchdowns from scrimmage in their careers.

In the second half of UCLA’s historic comeback win against Texas A&M, Aggies quarterback Nick Starkel suffered an ankle injury, which he has since had surgery on to repair. Backup Kellen Mond, a true freshman, replaced Starkel in the third quarter. He finished the game 3-of-17 for 27 yards.

Maryland pulled off a 51-41 upset of then-No. 23 Texas despite losing starting quarterback Tyrrell Pigrome, who tore his right ACL and is out for the season. Enter Kasim Hill, a true freshman who took over in the fourth quarter and secured the win. He completed all three of his pass attempts for 44 yards, and ran five times for 14 yards and one touchdown, which proved to be the game-winner for the Terrapins.

Hill and the Terps will play their next two games at home — against Towson and UCF, with a bye week in between — before opening Big Ten play on the road against Minnesota.

While Florida State sustained the biggest single injury from the Chick-fil-A Kickoff Game against Alabama when QB Francois went down, the Crimson Tide didn’t emerge unscathed. ‘Bama suffered four injuries to its defense; linebackers Christian Miller, Terrell Lewis, Rashaan Evans and Anfernee Jennings. Miller and Lewis will undergo season-ending surgeries, according to coach Nick Saban, while Evans and Jennings suffered what he characterized as “significant injuries.”

Nick Westbrook may not be a household name for college football fans, but the 6-foot-3 junior wide receiver was the Big Ten’s leading returning receiver after racking up 995 yards last season. He was injured on the opening kickoff of the Hoosiers’ game against Ohio State and will miss the remainder of the season with a torn ACL.

Westbrook was listed second on the team’s two-deep, which means wide receivers Simmie Cobbs, Donavan Hale and Luke Timian will be even more important to the Hoosiers’ offense. The trio combined for 26 receptions for 288 yards and one touchdown against the Buckeyes.