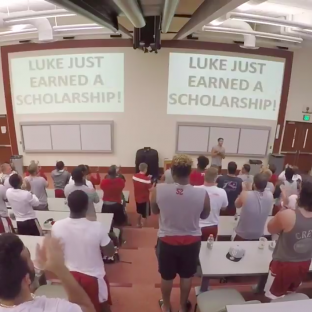 This week alone, Bowling Green, Georgia Tech, Notre Dame and Tennessee have awarded scholarships to walk-on student-athletes. Each presentation requires creativity and an element of surprise. The schools previously mentioned awarded scholarships through a 53-yard field goal challenge with a scholarship on the line, a personalized name plaque made for a locker room without any individual name plaques, and a “Circle of Life” drill between two brothers.

Now, Indiana has added its name to the list of schools in the giving spirit.

Walk-on redshirt junior wide receiver Luke Timian, who was named the team’s Outstanding Walk-On Player of the Year last season, was one of several Hoosier players called to the front of the team’s meeting room Friday to sing the school’s fight song. Behind him, two projection screens showed the message “Get loud,” in all caps, to his teammates in the audience. The message then changed to “Luke just earned a scholarship!” and his teammates went wild.

Indiana quarterback Richard Lagow was the first of many players who swarmed Timian. They lifted him up on their shoulders as they celebrated with Indiana’s newest scholarship player.

“I feel good, man. It’s crazy,” Timian told Indiana Athletics after he was awarded the scholarship. “I really wasn’t expecting that at all so I’m just very blessed. I’ve been given this opportunity by Coach Allen. I’m really excited to just continue the next step moving forward. I’m going to make the most of this opportunity.”

Timian appeared in all 13 of Indiana’s games last season, catching 19 passes for 277 yards and one touchdown.