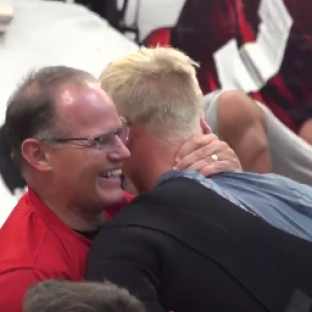 For the second time in as many days, Indiana football coach Tom Allen awarded a walk-on student-athlete a scholarship.

On Friday, wide receiver Luke Timian received a scholarship while singing the Indiana fight song in front of his teammates after a team meeting. On Saturday, redshirt junior tight end Ryan Watercutter was suprised with a scholarship from Allen, who did a heck of an acting job for the sake of the scholarship presentation.

“All you’ve done is embarass our defense,” an impassioned Allen screamed. “Do you know why? Because you catch balls every day. That’s all you do is catch balls. That’s why we’re putting you on scholarship, Ryan Watercutter is on scholarship at Indiana.”

Watercutter made his collegiate debut last season in the Foster Farms Bowl. He was named the Offensive Scout Team Player of the Year in 2016.

“You earned it because we were saying and this is true, last year during scouts every day this dude made unbelievable plays, making us look bad,” Allen said. “It was so consistent. He worked so hard. He did everything we asked him to do. He’s never late for nothing. He does everything, when I say this is the perfect mindset of a walk-on – is you – because he has a chip on his shoulder and something to prove, he makes no excuses, he asks for nothing. He’s going to earn it all. I know you guys respect him, I know you do. How can you not?”