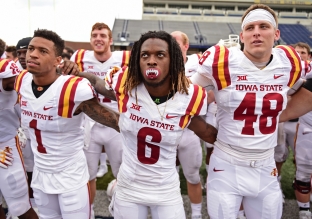 AMES, Iowa — Texas has owned its series with Iowa State, winning 12 of the last 14 games against the Cyclones since the two schools became rivals with the formation of the Big 12.

A Thursday night prime-time matchup will offer Iowa State a crack at a marquee win against a program that has had its number for two decades.

Iowa State (2-1) will be underdogs — like they usually are against the Longhorns (1-2) — in the league opener for both teams. But the Cyclones are on a bit of a roll, having scored at least 40 points in three straight games for the first time in over 40 years.

Texas might have found itself in its last outing as well, pushing fifth-ranked USC to double overtime on the road before losing 27-24.

“It’s irrelevant who we are playing and where we are playing them. It’s about us and the bunker mentality that we have within our locker room. I would be shocked if we didn’t come out and play with the same kind effort, energy, and togetherness that we did in Los Angeles,” said Texas coach Tom Herman, who was the offensive coordinator at Iowa State under former coach Paul Rhoads from 2009-11.

There’s no place like Jack Trice in gameday. pic.twitter.com/BDW5wpzIEg

Here are some of the keys to consider as the Longhorns and Cyclones, both coming off a bye week, prepare to meet in Ames:

Texas starting quarterback Shane Buechele has been taking most of the snaps with the first team after missing the last two games with a sore shoulder. Sam Ehlinger, a freshman, had Texas in position for an upset win against the Trojans. But Ehlinger also committed three turnovers, none more critical than a goal-line fumble in overtime. Asked if the Longhorns had settled on a starter, Herman said: “We have, but I’m not going to tell Iowa State.”

Iowa State’s offense is on pace to become perhaps the best in school history. The Cyclones are 16th nationally in scoring and 17th in passing (311.7 yards per game), and sophomore running back David Montgomery is averaging 5.7 yards per carry. But no defense gave Iowa State fits last season like Texas, which held the Cyclones to a pair of field goals in a 27-6 win in Austin.

“This will be a great challenge for us across the board,” Iowa State coach Matt Campbell said.

Texas has scored five non-offensive touchdowns this season. The Longhorns have returned three interceptions for scores, blocked and returned a field goal, and scored on a punt return. Cornerback Holton Hill has been the catalyst, scoring twice on interception returns and on that blocked field goal in a loss to Maryland.

Iowa State is 26th nationally in rush defense, and that includes a matchup against run-heavy Iowa. … Herman is 4-0 in his career when he’s had at least 12 days to prepare for an opponent. … The Cyclones came into 2017 wondering about their offensive line, but they’ve have allowed just one sack. … Texas, on the other hand, has lost three of its top linemen in Andrew Beck, Elijah Rodriguez and Connor Williams. … Iowa State’s only win over Texas at home came in 2015, when the Cyclones shut out the Longhorns 24-0.

“Winning is a habit and so is losing. So we’ve got to create those winning habits and we’ve got to finish ballgames in ways that winning teams finish games.” — Herman.