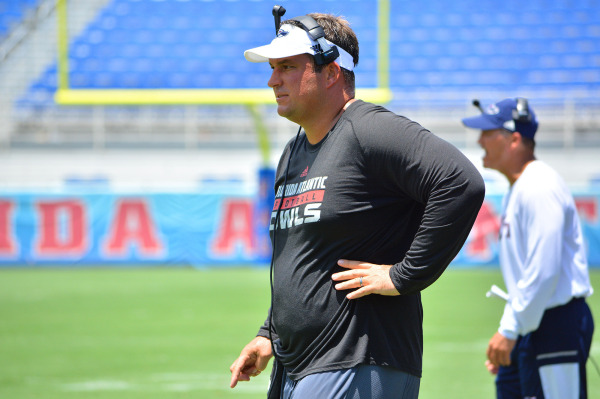 BOCA RATON — Lane Kiffin estimated it used to take 11 hours for his family to meet him.

Kiffin lived in Tuscaloosa, where he was the offensive coordinator of Alabama. His three kids lived in Los Angeles, and zigzagged the country to visit him. They flew from Los Angeles to Atlanta (usually) and then to Birmingham and then drove the hour to Tuscaloosa. Even when his family arrived, Kiffin was subject to coach Nick Saban’s long schedule.

“I might as well have been in Maine, because there’s no nonstop flights,” Kiffin said.

This year is different for Kiffin. In his first year as Florida Atlantic’s coach, he manages his own schedule. Direct flights into Fort Lauderdale are more available. Kiffin’s sister, Heidi, lives in Tampa. But it’s not just easier for out-of-town family to see Kiffin.

All his brother, Chris, and father, Monte, have to do is knock on his office door.

Lane hired Chris to be the Owls defensive coordinator, and later tabbed Monte to be a defensive analyst and pro liaison, marking the second time all three Kiffins have been part of the same staff. In 2010, all three were part of Lane’s staff at USC, with Monte coordinating the defense and Chris in an administrative role

Chris, 35, is a first-time coordinator who spent the past six years as Ole Miss’ defensive line coach. Monte, 77, is a coaching legend who has coached in 49 of the last 51 years (not in 1986 or 2015), including winning the Super Bowl with the Tampa Bay Buccaneers in 2002. Lane, 42, is on his fourth head coaching job, after previously leading the Oakland Raiders, Tennessee and USC.

Chris brought his wife and four children to Boca Raton. Monte brought his wife, Robin — Lane and Chris’ mother — to South Florida. Lane is no longer isolated from the rest of the Kiffin family.

“That was a bonus being here versus LSU or Alabama,” Lane said.

Lane is the coach who draws the most attention — from players, from the administration, from donors, from reporters — but Monte may be the one who steals the show inside the Tom Oxley Athletic Center.

On the eve of FAU’s “Rookie Show” last week, at about 9:30 p.m., Lane heard a commotion outside his office. It was Monte. In front of the 20-something graduate assistants, Monte was rehearsing “his James Brown moves.”

Monte’s role in the FAU program is officially as an analyst, but unofficially as a coach for the coaches. The Owls staff is riddled with young coaches. Tight ends coach Clint Trickett is 26. Offensive coordinator Kendal Briles is 34. Cornerbacks coach Keynodo Hudson is 38. And Chris is 35.

Monte serves as a mentor to them, imparting his half-century of coaching knowledge to the Owls staff.

“He loves helping those guys,” Chris said. “You’re ultimately a teacher in that room with your position group. How do you relate to them? How do you teach? Those are the biggest things we pull from him.”

Monte was the originator of the famed Tampa 2 defense and has been a defensive coordinator in both college and the NFL. In recent years, though, he’s held smaller roles in organizations. Last year, he was a defensive assistant for the Jacksonville Jaguars.

Lane jokes that being around the sport is like a drug for Monte. He tells assistant coaches to head home at 10 p.m. while he stays in the office. (“What is wrong with this picture? The 77-year-old just said ‘Hey, you need to go get some sleep.’ He just stays here,” Lane said.) He exchanges jokes and stories with the graduate assistants until midnight.

During preseason camp, Monte roamed the FAU practice fields with a script in hand. NCAA rules prohibit him from directly coaching the players, but holding the practice plan is a decent alternative.

Added Chris: “You can’t put a price on the kids coming out to a scrimmage and seeing their grandpa afterward.”

Even with Monte’s standing as a football giant, Chris said he’s never felt pressure to live up to his status. Instead, he’s always viewed it as a positive. Lane and Chris were always around the game, attending NFL camps as teenagers.

The Kiffins aren’t the only football lifers on FAU’s staff. Trickett’s brother Travis was FAU’s offensive coordinator in 2016, and his father Rick is the longtime offensive line coach at Florida State.

“If your father is a mechanic, you’re naturally going to know about fixing cars,” Chris said. “We were just around it. We were ball boys from the time we were young.”

His job at FAU is the biggest one Chris has held. He’s never commanded an entire defense, and Lane offered him a chance to. So what was the interview process like for Chris?

“We just got on the phone and just talked about it, just asked him a couple things that maybe as a younger brother you might be concerned about,” Chris said. “I got four kids, I want to make sure that he’s not going to be staying in the office until one in the morning every night. I got a family I like to see, too.”

At FAU, all three Kiffins are surrounded by family.

This article is written by Matthew DeFranks from Sun Sentinel and was legally licensed via the Tribune Content Agency through the NewsCred publisher network. Please direct all licensing questions to legal@newscred.com.