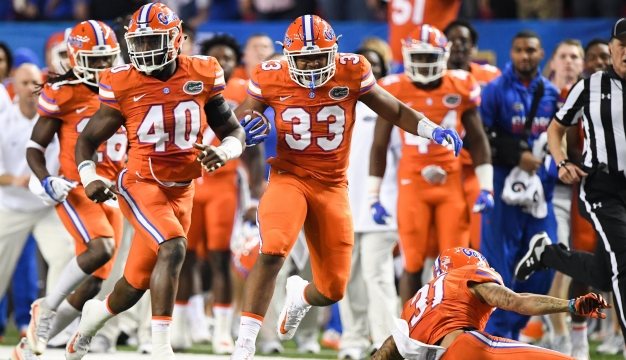 HOOVER, Ala. — Georgia’s got the two star running backs and an experienced defense. Florida has the intriguing transfer quarterback and has won 19 games over the past two seasons under coach Jim McElwain.

Together, the two programs arguably represent the best programs the Southeastern Conference’s Eastern Division has to offer.

But it is still unclear if one can finally push past the West and win a league crown.

Florida and Georgia were among four teams that took the podium at SEC media days on Tuesday. Both are trying to end the West’s eight-game winning streak in the league’s championship game, dating back to 2009.

Florida has been the East’s representative the past two years before running into a brick wall named Alabama. The Gators lost 29-15 in 2015 and 54-16 last season.

Despite the lopsided nature of last year’s game, Florida safety Duke Dawson believes the Gators can close the gap in a hurry.

“It’s small details,” Dawson said. “Coach Mac always preaches to us about the little things. I might be a step away from breaking on a ball that could change the game … it’s just little things like that.”

Florida has represented the SEC East in the championship game in each of Jim McElwain’s two seasons.

Florida has an intriguing quarterback situation after adding Notre Dame graduate transfer Malik Zaire in June. Zaire, who threw for 122 yards and a touchdown last season in a backup role, joins a competition that includes Feleipe Franks and Luke Del Rio.

McElwain didn’t give many clues about who would win the job.

“We’re always looking to add to everything that we do and create competition,” McElwain said. “And ultimately it doesn’t matter what the profession you’re in, but true competition is something that really breeds excellence.”

Their presence should continue to help sophomore quarterback Jacob Eason, who threw for 2,430 yards and 16 touchdowns last season. Georgia hasn’t played in the SEC championship game since 2012 and hasn’t won a league title since 2005.

“This is our chance to try to lead our team and lead them to something great,” Michel said.

Vanderbilt and Mississippi State were the other teams that were in Hoover, Alabama on Tuesday. The Commodores have some momentum after making a bowl game in 2016 for the first time in Derek Mason’s three-year tenure.

Mason has nine starters returning on offense, including Ralph Webb, who ran for 1,283 yards and 13 touchdowns last season. The defense has seven starters back, giving the team a veteran feel.

“I couldn’t wait to be a junior-senior football team in this conference,” Mason said. “Now, I’m not having to wait anymore. We’re here.”

Mississippi State is trying to make a bowl game for an eighth-straight season under coach Dan Mullen. Junior quarterback Nick Fitzgerald returns after throwing for 2,423 yards and running for 1,375 yards last season.

The 6-foot-5, 230-pound Fitzgerald is the latest in a long line of productive quarterbacks that Mullen has developed during his career. Other prominent QBs under Mullen include Alex Smith, Tim Tebow and Dak Prescott.

Mullen said he looks forward to watching Fitzgerald continue to develop. He said the junior’s attention to detail will determine whether he becomes a great quarterback.

“How quick can I get the ball out of my hands in a bubble screen when it’s there? How can I stay in the pocket a half a second longer or slide the throwing lane to make an easier throw for me?,” Mullen said. “Those are skills that are developed over a very long period of time.

“And the more you develop on them, the more successful you’ll be as a quarterback.”

This article was written by David Brandt from The Associated Press and was legally licensed through the NewsCred publisher network. Please direct all licensing questions to legal@newscred.com.