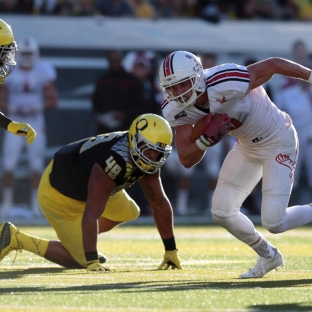 The NFL season kicked off Thursday night, and with nearly 300 schools represented on NFL rosters this season, talent from all college levels is on display, including from the Football Championship Subdivision.

It’s not uncommon to see FCS players emerge as stars in the NFL. Last year, the Philadelphia Eagles bet a big part of their future on former North Dakota State quarterback Carson Wentz, drafting him second overall. He played in all 16 games last season and is the team’s starter entering 2017.

Harvard leads all FCS programs with nine former players on NFL Opening Day rosters while Delaware, Illinois State and NDSU all have seven players in the league. Nevada, Northern Iowa and Portland State have six players while dozens of other schools have players sprinkled throughout the league.

Keep an eye out for these FCS rookies to see action this season and could emerge as future talents down the road:

The Rams used a third-round pick (69th overall) to take Kupp, a four-time FCS All-American and back-to-back FCS ADA National Offensive Player of the Year. The 6-foot-2, 205-pound receiver had a strong showing during the preseason and is scheduled to be the Rams’ starting slot receiver, and could emerge as a top target for Los Angeles quarterback Jared Goff. Kupp was one of only four Rams receivers to have a touchdown reception in the preseason. He had eight catches for 105 yards in the exhbition games.

Cooper Kupp is opening some eyes this August! pic.twitter.com/l2zCMeY5bq

Cohen was one of FCS’ best running backs last season and finished his decorated career with the Aggies with 5,619 rushing yards and 56 touchdowns, running for at least 1,100 yards in each of his four seasons in college.

“Too small, not durable, can’t take an NFL hit … better get out of bounds …” pic.twitter.com/y1omRxbrbE

The Bears selected Cohen in the fourth round (119th overall). He rose to second on the depth chart after the team cut veteran Jeremy Langford. Although Cohen doesn’t look to be a threat to take over for starter Jordan Howard just yet, he’ll likely see plenty of action in 2017.

Moss emerged as a standout defensive end for the Penguins last season playing alongside Derek Rivers, who had been projected to be another FCS rookie to make an impact this year before an injury sidelined him. Last season, Moss had 17.5 tackles for loss and 10.5 sacks to go along with four forced fumbles.

Although the fifth-round pick (167th) is not penciled in as a starter just yet — he’s playing behind six-year pro Olivier Vernon on the right side of the Giants’ line — Moss could be used as a rotational pass-rusher on the New York defense.