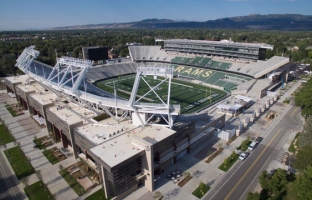 FORT COLLINS, Colo. — Colorado State’s new stadium can hold 41,000 fans and features a video board that’s nearly the size of a basketball court. Even the concession stands are culinary upgrades, with everything from burrito bowls to barbecue beef brisket.

The $220 million on-campus facility has the look and feel of something straight out of a Power Five conference, including the Rams’ first opponent — Oregon State on Saturday.

Big aspirations for the team from the Mountain West.

“We’re doing things like Power Five schools and guys are starting to internalize that, take pride and honor in the responsibility,” said senior offensive lineman Zack Golditch, whose team faces two Pac-12 teams right out of the gate and later travels to top-ranked Alabama on Sept. 16. “It’s a new feel, knowing that here at CSU we’re doing bigger and better things. Now, we’re able to show off the things we’re doing.”

Originally, this wasn’t supposed to be the opener for either team. But when Colorado State found out its conference schedule in March — and realized it would play 12 straight weeks without a bye — the school asked the Beavers to switch the game to what’s been termed Week Zero.

In doing so, the Rams have a chance to show off their new digs to a larger audience, since they’re kicking off the college football season. They wouldn’t mind christening the new field the same way they closed their old home — with a win.

After five decades of playing down the road at Hughes Stadium , the Rams moved their arena back on campus. To get comfortable with the surroundings, the team held a series of walk-throughs and scrimmages, including a recent dress rehearsal in front of more than 20,000 fans.

“The excitement that’s going to be here, we’ve talked about all those things, and we continue to talk about what we have to do to get ready,” coach Mike Bobo said of the vibe inside Sonny Lubick Field at CSU Stadium on game day. “But we’re not going to be tailgating. We’re not going to be enjoying the beautiful concourse or the food that they have at the concessions stands. … We’ve got to get ready to play a football game against a very good opponent.”

What are you planning on eating on Saturday?

The Beavers wouldn’t mind spoiling the occasion. They haven’t won a road game since knocking off Colorado at Folsom Field on Oct. 4, 2014.

“That’s a long time ago,” Oregon State coach Gary Andersen said. “We have to go out and play and get one of those victories and move onward.”

Being a four-point underdog serves as bulletin-board material for Oregon State.

“We don’t really have a bulletin board anymore,” Andersen cracked. “Have I mentioned it to the kids we’re underdogs? I’ll mention that every single week if we’re in that position, in that setting, in that scenario. The fact we are underdogs walking into their stadium, should have us on guard and should put us in more of a respectful position.”

Just try to watch this and *not* be pumped up for tomorrow’s nationwide opener.

The Rams are attempting to qualify for a fifth straight bowl game — a streak that’s only happened once in school history (1999-2003). They return a bulk of their offense in quarterback Nick Stevens, receiver Michael Gallup and a potent trio of tailbacks in Dalyn Dawkins, Izzy Matthews and Marvin Kinsey Jr.

Oregon State tight ends coach Dave Baldwin was the offensive coordinator for the Rams from 2012-14. He also served as Colorado State’s interim head coach for the 2014 Las Vegas Bowl after Jim McElwain left to take over at Florida.

Colorado State will be keeping close tabs on tailback Ryan Nall, who led the Beavers with 951 yards rushing last season and is on the Doak Walker watch list. “They’re scary offensively and it starts with their running game,” Bobo said.

Oregon State receiver Seth Collins was ruled out because of a finger injury. Collins missed the final two games of last season with an undisclosed illness that hospitalized him for nearly two weeks. Collins grabbed attention as a dynamic playmaker as a freshman when he played at quarterback. He moved to receiver last season.

This article was written by Pat Graham from The Associated Press and was legally licensed through the NewsCred publisher network. Please direct all licensing questions to legal@newscred.com.