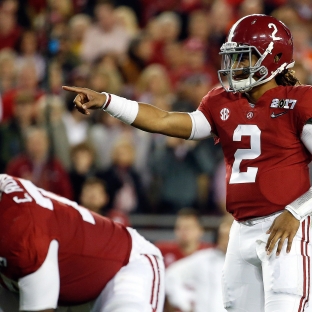 College football: Can Alabama put the SEC back on top after Clemson's big win?

Alabama and the Southeastern Conference are trying to climb back atop the college football mountain.

The SEC was toppled— at least temporarily — from that summit by the Atlantic Coast Conference last season. A powerhouse Crimson Tide team has a much shorter climb back after a down-to-the-last-breath loss to the ACC’s Clemson in the national championship game.

‘Bama has won 17 consecutive SEC games by an average of 21 points but coach Nick Saban insists “there’s a lot of parity in our league.”

Despite Saban’s perspective, there’s no debating that the battle for No. 2 has been more heated than the competition for the top spot the past few seasons. Exhibit A: Alabama’s 54-16 win over Florida in the last SEC championship game.

Alabama remains the decisive favorite to win a fourth consecutive SEC title despite losing four first-round NFL draft picks. No team has won the league four times in a row — or three for that matter before the Tide’s run — since Steve Spurrier and Florida dominated from 1993-96.

The first test might just be Alabama’s biggest of the regular season. The Tide opens with another ACC power, Florida State, in Atlanta’s new Mercedes-Benz Stadium.

“All the guys that did play in that (Clemson) game are really hungry to get back out there and play and show the world that we are one of the top teams in the nation,” ‘Bama receiver Calvin Ridley said.

Quarterback Jalen Hurts, the SEC offensive player of the year, gives Saban a returning starter at quarterback for the first time since 2013. He heads a group of promising young passers including Georgia’s Jacob Eason, Mississippi’s Shea Patterson and South Carolina’s Jake Bentley.

Not to mention transfers Jarrett Stidham at Auburn and Malik Zaire at Florida.

That first day of fall camp feeling (via @HailStateFB) pic.twitter.com/7Eb008eNsO

In the SEC West, teams like LSU, Texas A&M and Auburn are trying to play catch up to the Tide. Georgia, Florida and Tennessee are among the East Division teams hoping to close the gap with their West counterparts, who have held an eight-year monopoly on SEC titles.

The Gators have won the East crown in each of coach Jim McElwain’s first two seasons but are aiming higher.

“Getting that taste of nine wins, we now want to get more than that,” Florida defensive back Duke Dawson said.

East: Georgia. Kirby Smart’s second team has a strong backfield with Nick Chubb and Sony Michel, and Eason has a year of seasoning. LB Roquan Smith is among 10 returning defensive starters.

Jalen Hurts, QB, Alabama. The Tide is expecting him to be a better passer after an impressive freshman season somewhat marred by late-season struggles, especially in the playoffs.

Ex-Ole Miss coach Ed Orgeron is back in the SEC West at LSU. His former program is trying to regroup from the July 20 resignation of Hugh Freeze while in the final stretch of an NCAA investigation. Interim coach and co-offensive coordinator Matt Luke is leading the Rebels. Alabama offensive coordinator Brian Daboll has been a much talked-about hire.

ON THE HOT SEAT