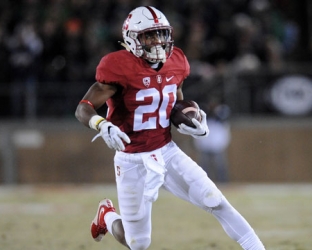 College football: Bryce Love stars in backfield in No. 14 Stanford's win over Rice

SYDNEY — Bryce Love proved he could fill in quite nicely as Christian McCaffrey’s replacement at Stanford, scoring a touchdown and finishing with 180 yard rushing to lead the No.14 Cardinal to a 62-7 victory over Rice on Sunday in the Sydney College Football Cup.

Love, installed as the No. 1 player in the backfield after McCaffrey was drafted in the first round by the Carolina Panthers, had 13 carries, including a 62-yard burst through the Rice line on Stanford’s opening play from scrimmage. He didn’t play much after the middle of the third quarter.

“Bryce is going to be our lead dog,” Stanford coach David Shaw said. “But it’s nice to know we’ve got some guys who can back him up. I’m excited about where Bryce is heading into this season. We don’t want to wear Bryce out in any one game, so those guys have got to come out and make plays like they did today.”

Cameron Scarlett was one of those guys.

Scarlett, a redshirt freshman who also moved up in the Stanford pecking order, had three touchdowns, all rushing, and finished with 68 yards on nine carries. He also had one 56-yard pass reception.

The Cardinal were 31-point favorites. They led 38-0 at halftime and scored touchdowns on their first four possessions.

STANFORD: Quarterback Keller Chryst, who tore the ACL in his right knee in December in the Sun Bowl, showed no sign of the injury. Chryst finished with 14 completions in 24 attempts for 253 yards and two TDs before Ryan Burns and later K.J. Costello took over with Stanford leading 45-0. Costello scored the final Stanford TD on a 25-yard run

“It was great to see Keller Chryst come and be completely healthy, and be able to run the show from the quarterback position,” Shaw said.

RICE: Redshirt freshman quarterback Sam Glaesmann won the starting job and had a very difficult beginning to his college career. Starting his first play from scrimmage on the Rice 10-yard line, Rice was hit for a delay of game and false start and the Owls later punted from deep in their end zone. Glaesmann was 7 for 18 for 69 yards.

“We’re a better team than we showed today,” Rice coach David Bailiff said. “When you play against a team like Stanford, or any elite team, you have to be at your very best. And we made some poor decisions early.”

Now I do what I want

HURRICANE WATCH: Rice players and staff had been keeping a close and anxious eye on developments in Houston from former hurricane and now tropical storm Harvey. The players have been keeping in touch with friends and family on social media, and team staff were in contact with spouses and partners back in Houston to make sure they were aware of neighbors and friends who might have emergency equipment such as generators. The team is scheduled to leave Australia on Monday morning for Los Angeles, with a decision expected in LA whether they will attempt to fly on to Houston.

STANFORD: The Cardinal offense was in strong early-season form, with 656 total yards — 369 passing and 287 rushing. Also, eight touchdowns, 27 first downs and an average of 9.0 yards per play.

RICE: The Owls were 5 for 15 in third-down conversions. Five Owls receivers combined for only 95 yards, the longest 28 yards by Samuel Stewart.

BIG ROAD TRIP: It was Stanford’s second game outside the U.S., and first since 1986 when the Cardinal beat Arizona 29-24 in Tokyo. It was the second year in a row that a regular-season college game was played in Sydney. Last year, Cal beat Hawaii 51-31 at the Olympic stadium with 62,000 spectators. This year the game was moved to Allianz Stadium, closer to the downtown area. Officials said there 33,181 spectators Sunday at the 45,000-seat venue.

STANFORD: After a week off, plays at Pac-12 favorite USC on Sept. 9

RICE: The Owls also have a week off before playing at Texas-El Paso on Sept. 9.

This article was written by Dennis Passa from The Associated Press and was legally licensed through the NewsCred publisher network. Please direct all licensing questions to legal@newscred.com.