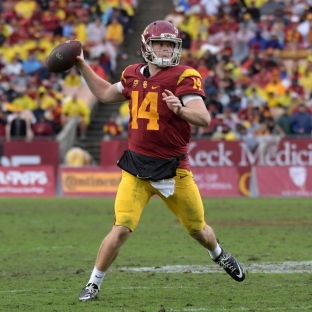 Southern California quarterback Sam Darnold and Penn State running back Saquon Barkley put on a show at the Rose Bowl last season and established themselves as two of the biggest stars in college football coming into 2017.

The two Heisman Trophy contenders highlight the first preseason All-America team in the history of The Associated Press.

Darnold passed for 453 yards and five touchdowns in USC’s 52-49 victory over the Nittany Lions. The sophomore comes into this season leading No. 4 USC on a nine-game winning streak. Barkley ran for 194 yards and scored three touchdowns against USC.

The AP All-America team is the longest-running annual honor roll of the nation’s top college football players, dating to 1925, and is usually released after the season.

Darnold was voted to the first team by a panel of 51 Top 25 voters, edging out Heisman winner Lamar Jackson, who is the second-team quarterback on the lists released Tuesday.

Joining Darnold and Barkley in the backfield is LSU running back Derrius Guice, who spent the last two seasons as back up to former All-America Leonard Fournette.

The first-team defense is led by two players who were postseason All-Americans in 2016: Houston defensive tackle Ed Oliver, who made it to the first team as a freshman last season, and Alabama defensive back Minkah Fitzpatrick. Florida State placed two defensive backs on the first-team with cornerback Tavarus McFadden and safety Derwin James, who missed most of last year with a knee injury.

Derwin James and Tarvarus McFadden have been named to the First Team #APAllAmerica Team.

Conference breakdown for the first team:

Washington linebacker Azeem Victor is another preseason All-American coming back from an injury. Like James, Victor blew out his knee, though his injury came in November in Washington’s only regular-season loss against USC. Victor seemed to be on his way to an All-America season last year. He was leading the Huskies with 68 tackles when he went down.

Washington State guard Cody O’Connell was the only offensive player selected to the first team who was also a 2016 All-American.

Utah punter Mitch Wishnowsky, who was second in the nation last season with a 47.7-yard average, was selected to the first team after being an All-American last year.

College football: 7 comeback players to root for in 2017