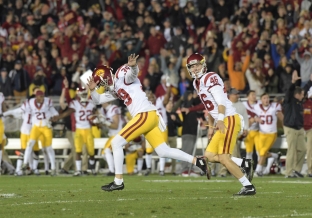 College football: AP preseason Top 25 a long way from how things ended up in final poll

The first AP college football poll will be released in a few weeks, providing a first glimpse of how teams stack up for the 2017 season.

RELATED: 50 storylines to watch out for this season

But how much does the AP preseason poll indicate how things will look at the end of the season? If we look at 2016, the answer is not much.

Although many predicted Clemson and Alabama as the two best teams — they were 2-1 in the preseason poll, and finished 1-2 after Clemson’s thrilling win in the championship game — the rest of the rankings went through a lot of changes over the course of the season:

In comparing the AP preseason poll from August 2016 to the final AP poll on January 10, 2017, 11 teams started the season ranked and ended it out of the poll completely. That enabled 11 programs unranked at the start of the season that would finish the season amond the Top 25.

Teams who were ranked at the beginning of the season but were out of the poll at the end: Notre Dame, Ole Miss, Michigan State, TCU, Houston, UCLA, Iowa, Georgia, North Carolina, Baylor and Oregon.

Some schools that didn’t make the cut for the preseason poll — but did receive votes — worked their way into the final Top 25. Those teams include: San Diego State, Utah, Wisconsin, Miami (Fla.) and South Florida.

Penn State made the biggest jump from nowhere to ranked. The Nitany Lions didn’t receive any preseason votes, yet surprised just about everybody in the Big Ten in earning a trip to the Rose Bowl. The Nittany Lions finished No. 7 in the final poll.

Two Pac-12 teams also made big jumps. USC went from 20 in the preseason to third in the final poll. Despite a College Football Playoff loss to Alabama, Washington jumped 10 spots from the first to last poll coming in at No. 4.

It’s also hard to forget “Row the Boat” and the magic P.J. Fleck created at Western Michigan. The Broncos were another example of a team who made their way up the AP Top 25 poll. They finished 13-1, with their only loss against Wisconsin in the Cotton Bowl.

So who will surprise AP voters and college football fans this season? The preseason poll comes out in late August. We’ll have to wait and see.