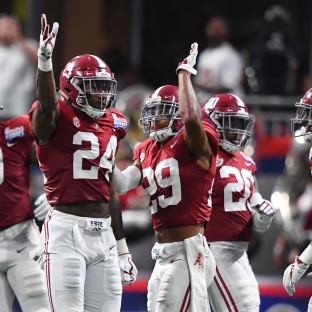 ATLANTA — Alabama will play Miami to open the 2021 season in the Chick-fil-A Kickoff Game at Mercedes-Benz Stadium, their first meeting since a memorable national title game in 1993.

Officials in Atlanta made the announcement on Tuesday, continuing the trend of matching teams from the Southeastern Conference and Atlantic Coast Conference.

RELATED: Next men up after Week 1 injuries

No. 1 Alabama just played at the new $1.5 billion stadium on Saturday night, beating then-No. 3 Florida State 24-7 in the first opener matching two teams in the top three of The Associated Press preseason rankings. That was followed by Tennessee’s thrilling 42-41 victory over Georgia Tech in double-overtime on Monday.

Barring postseason matchups, the Crimson Tide-Miami game will be the first between the schools since a No. 1 vs. No. 2 showdown at the 1993 Sugar Bowl, when Alabama romped to a 34-13 victory.

It ended the Hurricanes’ 29-game winning streak and gave the Tide its first national championship since the Bear Bryant era.

Alabama has already played in the Chick-fil-A Kickoff Game five times, winning them all, including the 2008 debut that resulted in a 34-10 upset of Clemson and signaled the start of the Nick Saban dynasty that produced four national titles.

Miami, led by former Georgia coach Mark Richt, will be making its first appearance in the game.

The Tide also will open the 2019 season in Atlanta, facing Duke from the ACC. Georgia will meet Virginia in 2020, while the other announced matchups bring in other Power Five leagues: Washington of the Pac-12 vs. Auburn in 2018, and West Virginia of the Big 12 vs. Florida State in a second 2020 game.