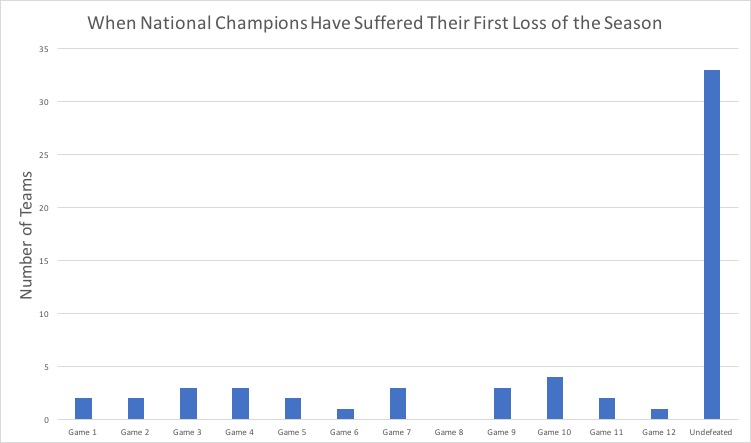 After last weekend’s soft opening, the 2017 college football schedule kicks off with a fury on Saturday, featuring a heavyweight matchup between No. 1 Alabama and No. 3 Florida State at the new Mercedes-Benz Stadium in Atlanta (8 p.m. ET, ABC). The clash between No. 11 Michigan and No. 17 Florida (3:30 p.m. ET, ABC) represents a strong undercard before the primetime showdown between the Crimson Tide and Seminoles.

Alabama and Florida State, which have combined to win five of the last eight titles, have national championship aspirations. Michigan, in the third year of the Jim Harbaugh era, is looking to take a step forward and make the College Football Playoff. A win on Saturday would go a long way for any of them in their CFP pursuits. But how does a loss in Week 1 affect their championship hopes?

RELATED: College football’s over (and under) performers since the start of the BCS era

A team that loses its first game of the season is by no means ruled out of the national championship picture, especially in the CFP era and especially when playing a ranked opponent. But history shows that few champions lose Week 1. In the last 50 years, only two national champions have lost their season opener.

The last national champion to lose Week 1 was Miami (FL) in 1983. The Hurricanes lost 28-3 at Florida but won out, capping off their season with a 17-16 victory over Florida State in mid-November and a 31-30 win against No. 1 Nebraska in the Orange Bowl.

College football: How the preseason AP Top 25 Poll compares to the final poll

It’s also worth mentioning that Colorado tied Tennessee in its season opener in 1990, when the Buffaloes went 11-1-1 (losing in Week 3 at Illinois) and won the national championship after an Orange Bowl win against Notre Dame.

Here is a look at the last 50 years of national champions, including the years when multiple teams shared the title, and when each team suffered its first loss of the season, if it lost at all.