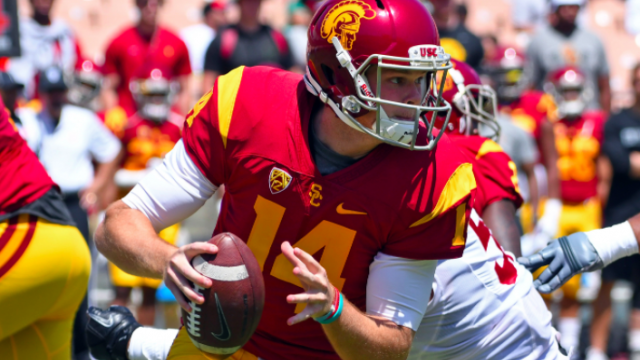 With just one season under their belts, members from the group have already captured victories in the Peach Bowl, Orange Bowl and Rose Bowl. One’s played in a national championship game. One just missed out on a 500-yard passing day. Two others proved this offseason that they can hit any receiver, even if they’re on a moving wakeboard or jet ski.

Sophomore slumps are unlikely for the following eight gunslingers. Will one of these QB’s try make it two consecutive years where a second-year quarterback lifts the Heisman?

Here are some names to know:

Texas has been searching for stability at quarterback ever since Colt McCoy graduated in 2009. Shane Buechele gave Longhorns fans a glimpse of hope in 2016, despite Texas’ 5-7 record.

Buechele tossed for over 250 yards four times and was on the passing end of four 70+ yard plays last year. He had a season-high 318 yards in a loss to West Virginia and threw four touchdowns against UTEP. Accuracy was an issue at times — he had 11 interceptions and a 60.4 completion percentage — but his overall numbers should rise under first-year coach Tom Herman, who crafted super-athlete Greg Ward Jr. into a formidable passer at Houston.

Sam Darnold will be near the top of everyone’s Heisman watch list and NFL draft board after a standout debut season in Southern California. The California native grasped the starting job in a Week 4 loss to Utah and subsequently led the Trojans on a 9-0 run, culminating with a memorable Rose Bowl victory over Penn State.

Darnold was 33-of-53 for a career-high 453 yards and five touchdowns in Pasadena. With his return, USC is expected to compete for the Pac-12 title and its first shot at the College Football Playoff.

Jacob Eason may possess the greatest arm strength of anyone on this list. He’s also shown the poise and capability to orchestrate two-minute drives in crucial situations — take this past year against Missouri and Tennessee.

Eason’s full statline will show that there’s still development to be made. At SEC Media Days, coach Kirby Smart stressed the importance of completing the intermediate plays more consistently and increasing Eason’s completion percentage. But Eason’s big-time arm, along with Georgia’s returning duo of running backs, has the Bulldogs tabbed as the media’s favorite to win the SEC East.

With just seven returning offensive starters, Florida State needs Deondre Francois to be an even bigger leader and igniter this season. Francois threw for more than 300 yards five times as a freshman — including 419 on opening night vs. Ole Miss — and was a big weapon on the ground as well. He took plenty of big hits but showed toughness and fearlessness under center.

Defense will lead the way for FSU this season, but Francois’ big-play ability will make the offense go.

After two years of searching, the Ducks have found the answer at quarterback with the emergence of Justin Herbert in 2016. The Eugene native saw the field for the first time in Week 5 and didn’t relinquish the starting job from Week 6 on. He found the end zone six times in his second start against Cal and scorched Arizona State for 489 yards the next week.

Perhaps most impressive was his low turnover mark. Herbert averaged 35 pass attempts per start and finished with just four interceptions. Now working under new coach Willie Taggart, whose fast-paced system allowed USF’s Quinton Flowers to shine in 2016, Herbert could be primed for a huge year.

Jalen Hurts was the 2016 SEC Offensive Player of the Year and Freshman of the Year.

Alabama will have a returner at starting quarterback for the first time since 2013, and he’s a talented one in Jalen Hurts. Hurts finished his true freshman campaign with 36 combined touchdowns and nearly 1,000 rushing yards. He was named SEC Offensive Player of the Year and Freshman of the Year in 2016 and led the Crimson Tide to a 13-0 start and a trip to the national championship game.

Hurts thrived behind a strong rushing game and the nation’s top defense. While Damien Harris and Bo Scarbrough return at running back, Hurts will be more heavily leaned on to account for some severe losses from the defensive unit.

Ole Miss opted not to use a redshirt on Shea Patterson last year after quarterback Chad Kelly’s season ended with a knee injury. Instead, Patterson was pressed into the starting role and filled in admirably over the final three games.

Patterson finished with a pair of 300-yard games and had two touchdown passes in each start to earn the Rebels’ trust heading into 2017. The mobile sophomore will make plenty of highlight tapes with his tendency to extend plays with his legs to open up downfield opportunities. Fellow sophomore receiver DeKaylin Metcalf is returning as well, which should make for a dynamic duo.

There’s considerable preseason hype surrounding Jarrett Stidham, who hasn’t seen the field since 2015. Stidham, a Baylor transfer, enters his first season with an Auburn program looking to challenge Alabama in the SEC West.

Stidham had three starts and appeared in 10 games during his freshman season in Waco, which was highlighted by a 419-yard, three-touchdown performance against Kansas State. He’ll now give the Tigers offense a much-needed spark, joining running back Kam Pettway and a young corps of receivers.