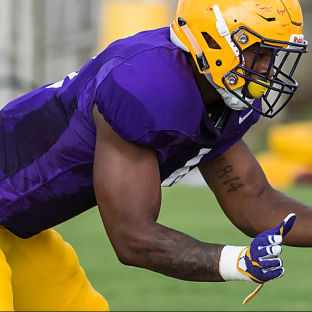 College football: 7 freshmen who could have a huge impact right away

Florida State football coach Jimbo Fisher says he learned long ago not to assume which of his freshmen would make the biggest impact each year.

How much someone might play in his first college season can depend on everything from his level of homesickness to the position needs of his new team.

“There are just so many different (factors),” Fisher said. “And position can have a big impact. Certain positions are harder to play early in your career than they are for other guys. There’s not as much learning.”

That uncertainty still exists even in an era when freshmen play an increasingly important role every season.

Just last year, Alabama freshman quarterback Jalen Hurts was named the Southeastern Conference offensive player of the year and Houston defensive tackle Ed Oliver became the first freshman to earn first-team Associated Press All-America honors since 2011. Hurts had the Crimson Tide on the verge of a national title before Clemson’s last-second rally in the championship game.

Here’s a look at some true freshmen who could emerge as forces this season:

The return of two-time, 1,300-yard rusher Myles Gaskin could make it difficult for any newcomer to get many carries in Washington’s backfield, but Ahmed’s playmaking ability demands that he earn some kind of role. Whether Ahmed is catching passes, running the ball or returning kicks, Washington will find some way to use him. Ahmed needed only six games to rush for 1,300 yards his senior year at Juanita High in Kirkland, Washington. Other true freshmen who could merit immediate playing time for Washington include tight end Hunter Bryant and defensive back Elijah Molden.

Akers threw for 3,128 yards and 31 touchdowns, and rushed for 2,105 yards and 34 more scores last year to lead Clinton (Mississippi) High to its first state title. Akers likely will start his college career behind junior Jacques Patrick on the depth chart but still should get plenty of carries.

Just about every year, it seems one of these two schools has a freshman wideout produce big numbers. It happened at Alabama with Amari Cooper in 2012 and with Calvin Ridley in 2015. Texas A&M’s Christian Kirk also had a huge freshman season in 2015. Both schools have promising first-year receivers on their roster this year. Jeudy caught five passes for 134 yards in Alabama’s spring game . Ausbon’s also an early enrollee who had a big spring and should step right in.

Chaisson’s pass-rushing skills already have been evident. “K’Lavon Chaisson has been dominant,” LSU coach Ed Orgeron said after the first week of training camp. “He’s exactly the type [of]player we thought he’d be.”

#LSU NT Greg Gilmore asked about learning how to pass rush. Amid the answer, he gave a revealing compliment of freshman K’Lavon Chaisson. pic.twitter.com/jIeOy3Sq2V

Chaisson posted 15.5 sacks his senior year to help Houston’s North Shore win a Texas Class 6A Division I state title. His ability to get to the quarterback should earn Chaisson an immediate role this fall. LSU defensive backs Grant Delpit, Todd Harris and Kary Vincent also likely will play right away.

Michigan must rebuild its receiving corps after losing Amara Darboh, Jehu Chesson and tight end Jake Butt to the NFL draft. That should create an immediate opportunity for Peoples-Jones. Peoples-Jones, who is 6-foot-2, leads a talented group of Michigan freshman receivers that also includes Tarik Black and Oliver Martin.

The departure of Detroit Lions sixth-round draft pick Brad Kaaya has created a wide-open quarterback competition at Miami. Perry arguably has the greatest upside of all the candidates, though Miami coach Mark Richt said Monday the experience of junior Malik Rosier and sophomore Evan Shirreffs currently gives them an edge.

N’Kosi Perry sits down in his first interview since joining the squad and discusses his time at Miami so far. pic.twitter.com/pYE7vVDvll

Perry, who is 6-4, is a dual-threat quarterback talent. Another freshman competing for the quarterback spot is Cade Weldon, the son of former Florida State star and 1991 Heisman Trophy runner-up Casey Weldon.