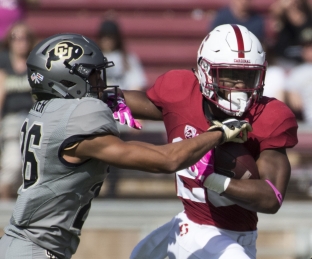 Lamar Jackson wasn’t on many casual fans’ radars entering 2016 until he went out and accounted for 13 touchdowns his first two games. Ed Oliver, Bo Scarbrough and a slew of first-year quarterbacks followed to highlight a full stable of breakout performers last season.

With the college football season just over a month away, keep your eyes on these budding stars who look to make a name for themselves in 2017.

Jerome Baker finished second in tackles and sacks for the 2016 Buckeyes but was largely overshadowed by bigger names like Raekwon McMillan and Malik Hooker on the defensive unit. That won’t be a problem this year, as Baker returns as one of the team’s most experienced and physically gifted players.

Lining up at weakside linebacker, Baker is a tackling machine (28 combined tackles vs. Michigan and Wisconsin) as well as a dynamic playmaker (two fumble recoveries, two interceptions). He returned his first pick last year 68 yards for a touchdown against Oklahoma. He’s sure to get plenty more recognition this season.

In a clogged receiver corps last year, rising junior Deon Cain only had 38 catches — but nearly one-quarter of them came in the end zone. He also gave a glimpse at what he can do on the biggest of stages, tallying five receptions for 94 yards in Clemson’s national championship game victory over Alabama.

Cain is someone who can beat defensive backs on deep patterns as well as give opponents nightmares on short plays in the open field. With the reliable Hunter Renfrow and versatile Ray-Ray McCloud also returning on the Tigers’ offense, Clemson remains well-stocked in the passing game.

Sophomore Rashan Gary showed glimpses of greatness in limited playing time during his 2016 true freshman year. Now all four defensive line starters in front of him are in the NFL, and it’s Gary’s turn to step up for a revamped Michigan defense.

Gary will start at defensive end this season where the Wolverines will expect plenty more than just the one sack he posted last year. The sophomore lines up at 6-5, 287 pounds with a scary mix of strength and quickness.

Stanford junior running back Bryce Love had 45 carries for 244 yards and accounted for two touchdowns in the pair of games former Cardinal standout Christian McCaffrey missed last season. In a small sample size, Love proved he could handle the heavier workload.

Stanford will need him to be a bigger piece in this year’s offense with McCaffrey now in the NFL and some questions at quarterback. Love reached the 100-yard mark on the ground three times last year and averaged seven yards per carry. The speedster will also likely take over McCaffrey’s kickoff return duties, giving him plenty of opportunities to rack up game-breaking plays.

Ole Miss’ initial plan was to keep Shea Patterson on the sidelines in 2016, but that changed when starting quarterback Chad Kelly tore his ACL at the tailend of the season. In stepped the true freshman out of Louisiana, who completed 55 percent of his passes and threw for six touchdowns in the final three games.

Patterson has a strong arm and is accurate in the pocket, but he’s also a danger when he rolls out. Patterson will often buy time and scramble around before finding an open receiver or tucking it in and making a big play with his feet. There are sure to be growing pains in 2017 as he faces a litany of strong SEC defenses — watch out for a four-week stretch including Alabama, Auburn and LSU — but Patterson will be an exciting player to watch on the rebuilding Rebels.

It’s hard to rule a rising senior coming off a 1,000-yard season a breakout candidate, but it applies in the case for Penny, whose spotlight has been dimmed while playing behind the all-time leading rusher in FBS history.

Penny steps into a starting role for the Aztecs for the first time after Donnel Pumphrey’s graduation. San Diego State shouldn’t worry about a dropoff in the running game, as Penny had five 100-yard games last year, highlighted by a 208-yard performance against Nevada. Penny (7.4) actually finished with a higher yards per carry mark than Pumphrey (6.1) in 2016, albeit in 214 fewer attempts. Along with Toledo quarterback Logan Woodside and Houston defensive lineman Ed Oliver, Penny will be on the short list of top Group of 5 stars to watch this season.