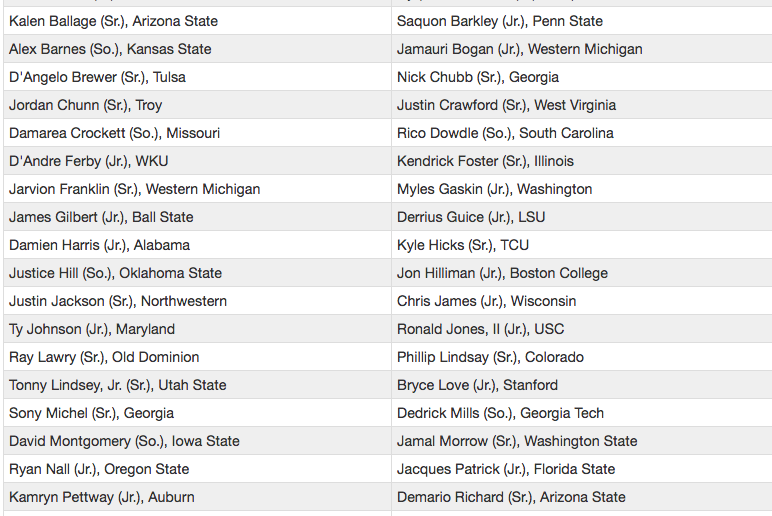 DALLAS – The PwC SMU Athletic Forum released today the preseason candidates for the 2017 Doak Walker Award. The Forum annually presents the award to the nation’s top college running back.

Junior Saquon Barkley of Penn State and Kamryn Pettway of Auburn, Doak Walker Award semifinalists from a year ago, headline the crop of preseason candidates. Barkley’s 2016 1,496 rushing yards is second among returning running backs, while Pettway leads all returners at 122.4 yards per game.

University athletic departments nominate candidates for the award and can continue to do so through October.

The PwC SMU Athletic Forum Board of Directors will name ten semifinalists on November 15. Three finalists, as voted on by the Doak Walker Award National Selection Committee, will be announced November 20. The committee will cast a second vote beginning November 26 to determine the recipient. The National Selection Committee consists of past recipients, former NFL All-Pro and college All-America running backs, media members and selected special representatives.

The recipient of the 2017 Doak Walker Award will be announced live on The Home Depot College Football Awards on Thursday, December 7 on ESPN. The Doak Walker Award Presentation Banquet is scheduled for February 16, 2018 in Dallas.

The award, which will name its 28th recipient in 2017, is named for SMU’s three-time All-America running back Doak Walker. It is the only major collegiate award that requires all candidates to be in good academic standing and on schedule to graduate within one year of other students of the same classification.