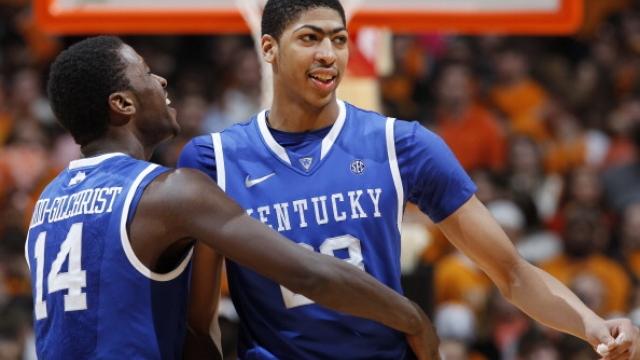 
With the NBA’s Western Conference Finals between the Denver Nuggets and Los Angeles Lakers well underway, Andy Katz took a trip down memory lane and ranked the top 10 college careers of players in the series.

On this week’s episode of March Madness 365 Katz reflects on those memorable players in this Nuggets-Lakers matchup. This episode also features interviews with Tennessee’s Yves Pons and John Fulkerson, as well as Rutgers’ Ron Harper Jr. Katz also released his latest edition of his Power 36 rankings.

Here are the Nuggets and Lakers who had the best college careers:

Caldwell-Pope played two years for the Georgia Bulldogs. The 6’5″ guard led UGA in points and rebounds his sophomore year with 18.5 points and 7.1 boards per game. Although the Bulldogs were never able to make it to the NCAA tournament during Caldwell-Pope’s stint in Athens, he made an immediate impact on Georgia’s squad and the entire SEC. KCP made the SEC All-Freshman squad and continued his success in his sophomore campaign when he was named the 2012-2013 SEC Player of the Year.

Not only is Danny Green a two-time NBA champion, but he is also an NCAA tournament champ as he helped propel the Tar Heels, along with the likes of Tyler Hansbrough, Ty Lawson and Wayne Ellington to a 2009 National Championship. Green as a key piece to that 2008-2009 North Carolina squad as he stuffed the stat sheets on both ends of the floor averaging 13.1 points, 4.7 boards, 1.8 steals and 1.3 blocks per game his senior season.

Rajon Rondo is another NBA champion looking to do it again for the Lakers. The former Boston Celtic had a standout career at Kentucky in the mid-2000s. The 6’1″ guard shot 49 percent from the field during his two-year stint in Lexington. He also averaged more than two steals per game during his college career and put up 9.9 points and 4.5 boards per game.

Keita Bates-Diop might be one of the lesser-known names on this list full of NBA stars, but his four years at Ohio State should not go unrecognized, especially his senior season. During the Buckeyes 2017-2018 campaign, Bates-Diop led Ohio State in points and rebounds per game averaging 19.8 points and 8.7 boards. The 6’7″ forward was also named the Big Ten Player of the Year for the 2017-2018 season.

The four-year point guard out of Duke and 2015 NCAA tournament champion lands here at No. 6 on Katz’s list. Cook was a leader all four years he played for Duke but he really began to peak his senior year. He shot nearly 40 percent from three-point land, averaged 15.3 points per game and helped propel Duke to a national championship.

If you were a fan of college basketball in the late-2000s or early-2010s, the last name Plumlee probably rings a bell. Mason was the middle brother in between Miles and Marshall, who also played for Duke, but Mason might have had the most stellar career as a Blue Devil between the three. Plumlee won a national championship as a freshman in 2010, but had his best season as a senior when he averaged 17.1 points and 9.9 boards per game.

Paul Millsap was an absolute force for Louisiana Tech. The 6’8″ Denver Nugget forward averaged a double-double each one of his years as a Bulldog. He also averaged more than a block a game as a freshman and sophomore and more than two blocks a game as a junior. Millsap finished his career at La. Tech averaging 18.6 points, 12.7 boards, two blocks and 1.3 steals per game.

Monte Morris played four years for the Cyclones and got better every single year. Starting every game from his sophomore year through his senior year, Morris increased his scoring average each year finishing with 16.4 points per game his senior season, which was paired with 6.2 assists and 1.5 steals per game. He also led ISU to a Big 12 tournament title his senior year and was named the Big 12 tourney MVP.

Jared Dudley was Mr. Boston College in the middle of the 2000s. The 6’7″ forward started all 130 games he played for the Golden Eagles and was one of the smartest basketball players in the college game. Katz noted his basketball IQ as his biggest asset, as he transformed himself into an NBA-caliber player between his junior and senior seasons. Dudley averaged 15.9 points, 7.2 boards and shot more than 50 percent from the field during his career. He was named the ACC Player of the Year his senior season.

One of the best players on the floor at any given time lands here at the No. 1 spot — Anthony Davis. Davis helped lead Kentucky to a 2012 National Title behind his 14.2 points, 10.4 boards and 4.7 blocks per game. He was also named the Naismith National Player of the Year, SEC Player of the Year and the NCAA tournament’s Most Outstanding Player — all in one season