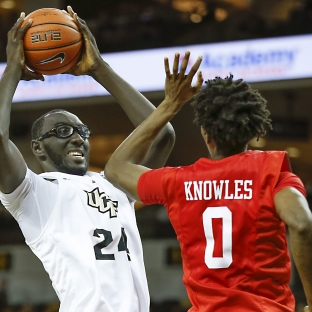 The tallest man in college basketball was walking from the University of Central Florida student union to his dormitory one recent morning, waiting for the light to change at an intersection when a driver — perhaps under the illusion that there’s more than one 7-foot-6 kid enrolled there — hit the brakes and yelled a question out the window.

Fall waved, shrugged and smiled as the driver shot him a thumbs-up and drove away.

College basketball: Can each of the preseason Top 25 win the national championship?

This is an everyday thing for Elhadji Tacko Sereigne Diop Fall, a 21-year-old from Senegal who grew up playing soccer, couldn’t stand basketball when he first started playing five years ago and now has hopes of an NBA future. He bows his head to get through doorways, prefers sandals to shoes because they’re easier on his size 22 feet, and has found that even first-class airplane seats don’t give him enough leg room.

If everyone at UCF — and in college basketball — doesn’t know who he is yet, they might soon.

“He’s learning things now that another player might have learned five years ago, by no fault of his own,” UCF coach Johnny Dawkins said. “He just picked up the game later than everybody else. He’s super-intelligent, speaks multiple languages, he’s just off the charts. He just needs more experience. And how do you gain experience? There’s only one way. You’ve got to get out there and do it.”

Come out again to watch this big fella, starting Nov. 10.

This is Tacko Fall! pic.twitter.com/kBNKok3v1A

Fall is a quick study. He’s the reigning defensive player of the year in the American Athletic Conference, a blocker of 164 shots in his first two college seasons and a changer of countless others. He’s made 73 percent of his field-goal attempts in college, since most come around the rim. Defenses last season started pushing him more and more away from the basket, so Fall added a few pounds of muscle this offseason in hopes of pushing back.

He took a look at the NBA this past spring, visiting with five clubs to get their feedback on his game.

The critiques weren’t often kind. But he listened and learned.

“They showed me things,” said Fall, who is listed at 295 pounds. “I was able to see it, not just hear about it, but see it. Skill-wise, I added a lot to my offensive game. Defense is probably going to be the biggest thing for me because of my size and how I can affect the game, but the game has changed a lot. There’s versatile bigs now and I need to keep up.”

They need to keep up with him, too.

Fall might be an unusual star, but a star nonetheless. Walk with him around campus, and one of two things often happen — either fellow students yell his name and wave, or they try to act cool while sneaking a selfie. Fall doesn’t mind in either case. And yes, he’s heard every joke imaginable about his height and his name.

“He’s very comfortable with who he is,” said Dawkins, who played with 7-7 Manute Bol and 7-6 Shawn Bradley in the NBA and tries to impart wisdom to Fall on what he learned from their experiences.

Fall knows what they went through, but doesn’t want to be considered The Next Bol or The Next Bradley.

Fall truly is a center of attention.

So nice of @ByTimReynolds to come up from Miami to interview @tackofall99 and laugh at his jokes.

We all know the big fella ain’t funny pic.twitter.com/4ytyLPA6F3

Wichita State is new to the American Athletic Conference this season, so at the league’s media day last month, Shockers coach Gregg Marshall was learning plenty of new names and faces. Fall, who didn’t exactly need a “Hello My Name Is” sticker on his black UCF polo shirt, went up to Marshall and introduced himself anyway.

Marshall was impressed, and hadn’t even seen tape yet.

“I saw him in the hallway,” Marshall said. “I’ve never seen a human that big. He’s a great young man.”

Fall’s story is almost as unique as his size. Born in Senegal, his family went through some very difficult times. He often didn’t have enough to eat, to the point where he would have nothing for breakfast and then would try to ration his school lunch and preserve some to serve as dinner. Money was often tight.

MORE: What March Madness could look like if the preseason polls are correct

When Fall was 16, Ibrahima N’Diaye changed everything. He ran a basketball academy and suggested to Fall that he try to play in the U.S.

There was one small problem. Fall despised the game, but eventually came around thanks to his basketball-loving grandmother.

“There used to be cartoons on every day at 5 o’clock,” Fall said. “And one day, I think our national basketball team was competing, my grandma put that on instead of the cartoons. We had only one TV, and I got mad.”

He got over it.

He came to the U.S., first going to Houston and then bouncing around a bit before settling in Florida. He enrolled at Liberty Christian Prep — a place where the devout Muslim could have plenty of spirited, respectful, thought-provoking conversations with teachers and other students about religion.

It was also a place where he realized basketball could provide a future.

“The tough times really make you appreciate what you have,” Fall said. “It’s destiny. I met a guy who I had never met before, went home to talked to my mom about playing basketball which I never imagined I would play, wound up coming to the States and ended up in Florida, the best place I could have ended up at. Everything worked out just fine.”

MORE: Which preseason All-America could win Player of the Year?

He isn’t sure if he’ll declare for the NBA draft next spring or just again explore his options. He speaks three languages now and is trying to learn Japanese, largely because of his affinity for anime. Food isn’t hard to find now — pasta and chicken before every game is his routine. And he’s hoping that his mom, whom he hasn’t seen in five years, might be able to get to a UCF game this season.

And one day, he wants to go home with NBA money to do some good. Ask him his dream plan, and he’ll say it involves being able to build schools in Senegal.