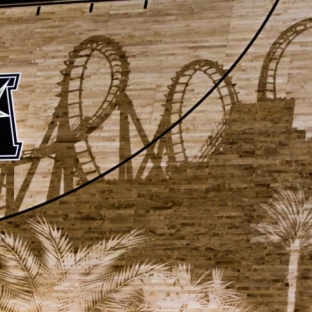 There are plenty of positives to a life if one were to attend UCF. One of the most specific upsides is UCF’s proximity to Universal Orlando Resort; just a half-hour car ride southwest of campus, UCF students can make a day trip almost any time.

Luckily for UCF’s men’s and women’s basketball teams, the Knights’ new floor at CFE Arena is bringing roller coasters — and palm trees — much closer to the hardwood. In fact, it’s putting them *on* the hardwood.

UCF introduced the latest edition of its court Wednesday. Out is the old two-toned look from last season, with a gray wood center court and tan wood inside the arcs.

The new court adds its own twist on Florida’s attractions, while giving the baselines a sharp spruce-up with white “Knights” lettering on black paint.

It’s certainly an Orlando-themed court, more than just a UCF-themed court, and the design really drives home the community effort with the tag line “Orlando’s Hometown Team” in white amidst the ferris wheel and foliage.

From the school: “The new court represents the Knights as Orlando’s Hometown Team, featuring elements that highlight Orlando and Central Florida, including the climate, the attractions and the city.”

College basketball: 9 of the most interesting court designs

Overall, it’s a pretty bold statement from a team looking to kick off the season with a bang. The Knights’ first home game of the season Nov. 10 vs. Mercer.