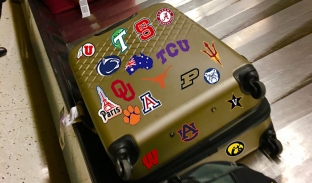 Once every four years, college basketball programs are allowed to embark on a foreign trip and given 10 extra practices in the summer to prepare. Many power conference schools (for this post, we’re looking at schools in the American Athletic Conference, ACC, Big 12, Big East, Big Ten, Pac-12 and SEC) chose to take advantage of the rule this summer, taking international trips for the basketball and cultural experiences.

Here’s a travel guide for the power conference schools that scheduled foreign trips for this summer:

ICYMI: Here are the highlights from our win in the first exhibition in Spain. #ArizonaInEspana pic.twitter.com/OqBPdEHwBC

Let’s be honest… You can’t get enough of @brandolph902 and his NASTY throw down in Valencia either. #ArizonaInEspana pic.twitter.com/4Oue8jRUva

3-0 record (Scores and statistics were not released)

Day 60: up early, 2 back 2 . Thanks @AnthonyTravel + our guide Carmen & Miguel our driver for a wonderful experience! #DawgsInSpain pic.twitter.com/19709ufVCW

Butler def. a team of professional players from Madrid 84-80

Butler def. a team of professional players from Valencia 81-68

Highlights from last night’s game in Madrid. (We included Mr. McDermott’s finish at the rim as a bonus, but that’s a travel internationally) pic.twitter.com/g4YQZKF3eb

What a way to end it! KJ Lawson nails full-court heave at the buzzer to close out the KU victory.

Back in action tonight against Stella Azzurra pic.twitter.com/6lUUekP2PT

Before the game, we sent the #Sooners on a scavenger hunt across Sydney with different tasks such as singing in front of the Opera House. pic.twitter.com/uL41xGx2We

New Zealand students quickly learning not to challenge @TheTraeYoung to 1-on-1… pic.twitter.com/HYPBaNG8J4

A clinic with the local squad to get our Bahama Saturday going #ClimbWithUs pic.twitter.com/lf7C05tTOo

Eventful day one in Taipei.

Final stats from today’s win over the Longhorns, a team that was assigned names mins before tip.

This is our new friend Boaz.

Head Coach @MikeDunleavySr was a star on the spike ball sand this afternoon on the beach in Barcelona #TulaneInSpain pic.twitter.com/vKhRjSbfc8

Game 2 highlights against Carleton from the USVI! #AnchorDown #BTISummer pic.twitter.com/Apbn87oSQF

Now this is how you start an adventure!

Miss basketball? We got you.