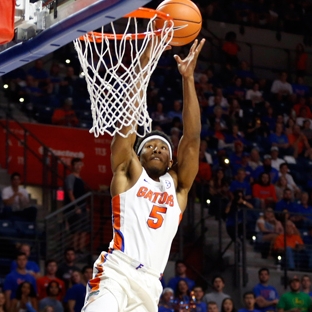 College basketball today: Breaking down the Motion and Victory brackets in the PK80 tournament

Happy Thanksgiving, where the attention turns to Portland, Ore., for the PK80, the one and only tournament to honor Phil Knight’s 80th birthday and his impact on the sport.

The unique event, hatched by Michigan State athletic director Mark Hollis, brings 16 teams to Portland, for two eight-team tournaments and a pair of champions by Sunday.

MORE: 16 storylines to watch in Thanksgiving’s most loaded tournament

So, let’s dive into the Victory and Motion brackets.

1. Best matchup: Arkansas-Oklahoma. Trae Young is a stud and is off to a sensational start. He’s averaging 18 points and 11.5 assists a game through the first two. That’s 23 assists and only five turnovers so far. The Sooners are on the rise after a retooling season a year ago. Arkansas could be the latest SEC team to surprise early in the season (see: Tennessee after the win over Purdue). Jaylen Barford is the Hogs’ star, averaging 20 a game. The winner likely gets North Carolina after the Tar Heels dispatch Portland later today. An Arkansas-UNC rematch from the NCAA tournament would be a good watch (maybe not as intense as last season, but still worthy of the hype). Oklahoma-UNC could be just as entertaining.

It all starts tomorrow. #PK80 pic.twitter.com/imUWQzp4tB

2. UConn and Oregon are unknowns, right now. The Huskies have beat up on lesser competition. The same is true of Oregon. Let’s assume Michigan State, despite Miles Bridges being day-to-day with a sprained ankle per MSU, beats DePaul. Either UConn or Oregon will have a golden chance to pull off a resume win against the Spartans. Michigan State needs this week to show what we all believe to be true — when this team is healthy on the floor the Spartans are one of the favorites to win the title.

Day one of @pkinvitational off to a great start

3. The player most on display, who is not on Duke and in the Motion bracket, is Texas’ Mo Bamba. Through two games, he’s posting 14 points, nine boards and 4.5 blocks a game. He could have himself a weekend in Portland if the Longhorns get past Butler and then face Duke. The Bamba-Marvin Bagley matchup would be the one coveted by NBA personnel watching and those of us who crave showdowns — especially in the post. This is also a real shot for Shaka Smart to show off what he has worked hard to achieve in his brief tenure in Austin. A Texas run wouldn’t just continue to prove the Big 12 may be strong/deep yet again (see: Baylor winning the CBE), but also start to build coveted resume wins. Now, of course if Butler beats Texas, then the PK80 gives us another Duke-Butler game, giving us the chance to fondly look back at one of the best finishes in Final Four history. Ahhhh.

MORE: Move over Kentucky, is Texas A&M the favorite to win the SEC?

4. Florida and Gonzaga, where art though? The Gators reached the Elite Eight under Mike White last March. The Zags were within a few minutes of a national title. Both teams have a chance to pull off another special season. But duplicating that is hardly an easy chore. Canyon Berry, Devin Robinson and Kasey Hill are gone, but Egor Koulechov and Jalen Hudson are providing plenty of scoring pop as well as the return of KeVaughn Allen and Chris Chiozza (he hit the game-winner to beat Wisconsin in an epic Sweet 16 at MSG).

The Zags are without Nigel Williams-Goss, Zach Collins, Jordan Mathews and Przemek Karnowski. But the Zags don’t rebuild, they reload. The experience of Josh Perkins, Silas Melson, Johnathan Williams and Killian Tillie is complimented by impact freshmen Corey Kispert, Zach Norvell Jr., Jacob Larsen and sophomore Rui Hachimura. Florida has to get past Stanford and Gonzaga by Ohio State to meet, but if either one gets to the title game they’ll be able to use that as a springboard for the rest of the non-conference portion of the schedule.

5. Must-see matchups please…UNC-Arkansas and Oregon-Michigan State in the semifinals and a UNC-Michigan State title in the Victory bracket. Oklahoma-UConn in the consolation round would be welcomed too. In the Motion bracket, please deliver Duke-Texas and Gonzaga-Florida in the semifinals. Any combination after would be fine. These four could all be playing in the second weekend of the tournament. Stanford-Butler in a consolation bracket would probably be a physical affair, and one that would/could go down to a final possession.