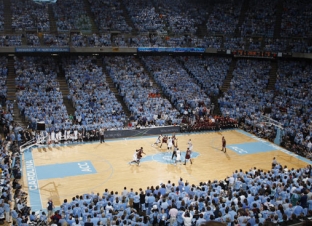 College basketball season officially starts on Sept. 29, when teams can begin practice for the 2017-18 season. A handful of teams will enter the season with home winning streaks that began one, two, or even three seasons ago. It may come as a surprise that only three of the 10 teams with the longest active home winning streaks play in a Power 5 conference.

The Aggies won all of their home games last season, earning an NCAA tournament bid as a No. 16 seed in the process. UC Davis defeated fellow No. 16 seed North Carolina Central in the First Four before falling to No. 1-seeded Kansas, 100-62. The Aggies’ home opener is on Nov. 29 against Northern Colorado.

Since the 2009-10 season, the Rams have gone undefeated at home once, lost just one game there three times, and had a pair of two-loss home campaigns. VCU finished second in the A-10 last season behind Dayton, which also appears on this list, in large part because of its 15-1 record at home.

The Catamounts had an historic year for their program, earning a No. 12 seed in the NCAA tournament after going undefeated in America East play. Vermont won 22 of its final 24 games, including its last 13 home games. The Catamounts open this season on the road at Kentucky but they’ll have the opportunity to add to their winning streak when they host Maine-Fort Kent on Nov. 22.

Each day is an opportunity to get better.

The Flyers are one of two A-10 teams to carry a double-digit home winning streak into the 2017-18 season. New Dayton head coach Anthony Grant will inherit a 14-game winning streak at UD Arena, where the Flyers went 15-1 last season. They’ll open the season with a home game against Ohio Dominican.

The defending national champions’ last loss at home came at the hands of their rivals down the road and was a stunner. No. 20 Duke played only seven men, and only five scored, but the Blue Devils dumped fifth-ranked UNC on a frigid night (1-for-13 in 3-pointers) for the Heels. North Carolina’s streak should eclipse 20 games this fall if the Tar Heels can handle their business during the non-conference portion of their schedule.

What a fun ride it was. Thank you fans for supporting this great group of guys. #ForeverNoles pic.twitter.com/6EnVqGl9Gt

The Seminoles started their streak 10 days after their loss to Georgia Tech with a convincing win over Notre Dame, then managed to run the gauntlet of the ACC and go undefeated at home last season. Florida State defeated No. 21 Florida, No. 21 Virginia Tech, No. 7 Duke, No. 15 Notre Dame, No. 12 Louisville and No. 25 Miami there last season.

Dating to the start of the 2013-14 season, SMU is an incredible 68-4 at home, including the Mustangs’ current 22-game winning streak. Even though the team’s streak began in early February 2016 —  during the heart of conference play — the first win was a 69-60 victory over Gonzaga, followed by a perfect 18-0 home streak last season.

Texas Southern’s road record in the last three seasons is 29-34, so how could the Tigers possibly have the third-longest active home winning streak in college basketball? Texas Southern schedules one of the most ambitious non-conference schedules around. Last season, the Tigers’ non-league schedule included Arizona, Louisville, Cincinnati, LSU, TCU, and Baylor, and they didn’t play a home game until Jan. 14. The experience has paid off in conference play. The Tigers have won the SWAC in each of the last three seasons. They’ve been perfect at home over the last two years.

The Bearcats lost three of their five home games in the month of December during the 2015-16 season, but they didn’t lose at Fifth Third Arena in 2016 or so far in 2017. Cincinnati’s dominance in the American Athletic Conference has certainly helped, as the Bearcats have gone 28-8 against conference foes during the regular season since the start of the ’15-16 season.

Ironically, Cincinnati’s impressive winning streak at Fifth Third Arena will remain intact regardless of how the Bearcats perform this season. That’s because the arena is undergoing renovations, so the team will play at Northern Kentucky University’s BB&T Arena this season, then return to Fifth Third Arena for the 2018-19 campaign.

For perspective, Oregon’s last loss at home, to No. 7 Arizona, came in just the second conference game of the 2014-15 season. The team hasn’t lost at Matthew Knight Arena since. That’s essentially three full conference schedules and two non-conference ones without a loss. In that span, the Ducks have downed No. 9 Utah, No. 20 Baylor, No. 21 USC, No. 2 UCLA, No. 22 USC and No. 5 Arizona at home by an average of 13 points. In the last three seasons, Oregon has advanced to the Round of 32 in 2015, the Elite Eight in 2016 and the Final Four last spring.