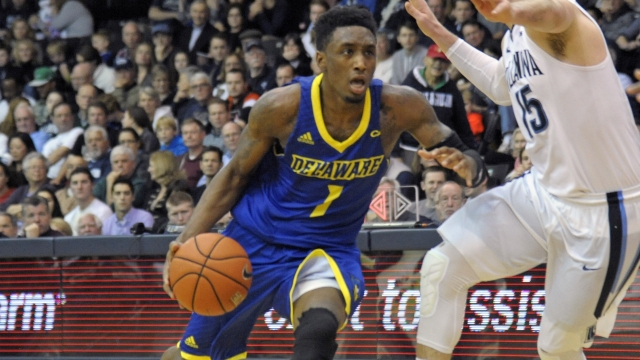 COLUMBIA, S.C. — Kory Holden smiles at the congratulations he hears from South Carolina fans at the team’s run to the Final Four last year. He also listens intently when they tell him how hard it will be to duplicate that success, given all the Gamecocks have lost.

Holden understands the concerns — but no way accepts them.

“We got two weeks off after that Final Four run, then we hit the weights,” Holden said this week. “Two weeks later, we were right back at it.”

Holden, the high-scoring Delaware transfer, is among those looking to fill the very big sneakers left by last year’s stalwarts, Sindarius Thornwell, Duane Notice, Justin McKie and P.J. Dozier. Thornwell, the Gamecocks’ leading scorer last year, was the soul of the program, helped by fellow seniors Notice and McKie. Dozier was a 6-foot-6 basketball prodigy who left for the NBA after his sophomore year.

Holden believes their leadership and spirit left a major and lasting impact on the returning players and newcomers.

“Definitely working with them and listening to how they speak, how they approached the game, that helps a lot,” Holden said. “I think Sin, P.J., Duane and Justin all rubbed off on us so we can keep this going.”

It certainly won’t be easy.

Kory Holden sat out last season after transferring from Delaware.

The Gamecocks were simply happy to erase a 13-year NCAA tournament drought with their selection last March. Some three weeks later, they had stunned college basketball with their first run to the Final Four. Along the way, South Carolina knocked out No. 2 seed Duke, No. 3 seed Baylor and No. 4 seed Florida to advance.

Holden, who practiced with the team last year as he sat out per NCAA transfer rules, said the fire to achieve that last year’s team had is still very much alive in this new group, even though the Gamecocks will be without three-fifths of their starting lineup when the season begins.

The newcomers “came right in, ready to learn, ready to work every day,” said Holden, who averaged nearly 18 points a game with the Blue Hens two years ago.

RELATED: Nine transfers who will make an immediate impact

South Carolina is participating in two weeks of community outreach, mixing with fans and children at events with the Special Olympics, a veterans hospital in town and a youth clinic with the Columbia Parks and Recreation Department. The response to last year’s success is the first thing players hear about at nearly every stop.

“People really enjoyed what we did,” guard TeMarcus Blanton said. “We want to do it again.”

That desire has kept coach Frank Martin on his toes this offseason. After a raise and a contract extension weeks after the NCAA run ended, Martin was left to deal with Dozier’s departure. The guard blossomed during the NCAAs and, if he returned, would’ve been an All-Southeastern Conference candidate — even possibly vying for the league’s player-of-the-year award.

Instead, Martin will have to look to Holden, Hassani Gravett and Rakym Felder to fill the backcourt in a lineup that returns forwards Chris Silva and Maik Kotsar. While recruiting never stops, according to Martin, Dozier’s decision has led the coach to look for help anywhere and everywhere.

MORE: How will UConn fare in a stronger AAC this season?

Get to know the newest member of our coaching staff, @ChuckMartin_SC as he sits down for a conversation with @DScottGamecocks! #Gamecocks pic.twitter.com/RqSsWiV9p6

Frank Martin thinks his team has been built over the past few seasons for the long haul and has the ability to sustain its new success.

“If I would’ve thought, ‘Can’t do that,’ I wouldn’t have come here five years ago,” Martin said. “So I can’t have players who think, ‘Can’t do that.'”