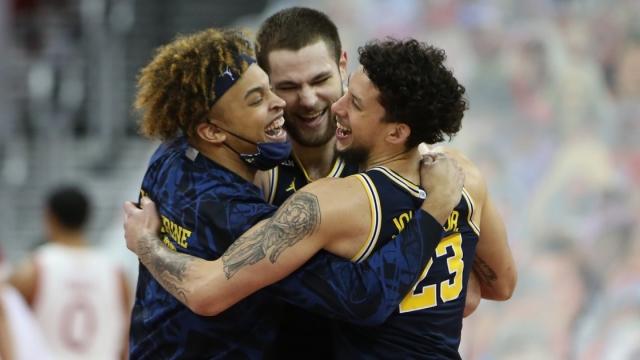 College basketball scores: Michigan wins in its return to action, plus other reactions from Sunday's slate

On Sunday, one Big Ten team ended a three-week drought of not playing, while another team in the conference ended a winless-in-conference-play drought that had lasted for more than a year. Elsewhere in the country, a second team joined Gonzaga as a 20-game winner this season, and that team reached the 20-win mark by taking down a top-25 opponent in overtime.

Here’s everything you need to know from Sunday’s men’s basketball action.

Prior to Sunday, No. 3 Michigan last played on Jan. 22, when it won at Purdue. The Wolverines had been on pause for roughly three weeks and in their first game back, they won at Wisconsin 67-59 on Sunday to improve to 14-1 (9-1 Big Ten). They’re in first place in the Big Ten, with a 1.5-game lead over Illinois, which is 10-3 in conference play.

Michigan outscored Wisconsin 21-8 over the final 10 minutes of the game to complete a come-from-behind victory after Wisconsin went on a 12-1 run late in the first half to pull ahead by 14 points. Isaiah Livers led all scorers with 20 points, including four 3-pointers, while freshman center Hunter Dickinson had a double-double with 11 points and 15 rebounds.

Michigan is just behind undefeated Gonzaga and Baylor in the AP Top 25 poll, and the Wolverines were one of the four No. 1 seeds in the top-16 reveal on Saturday.

The Wolverines have five remaining regular season games that are currently scheduled:

A high-profile split in the Missouri Valley

One day after Loyola Chicago beat Drake 81-54 at Drake, the Bulldogs bounced back to down the Ramblers 51-50 in overtime on Sunday. Loyola Chicago is in first place in the conference with a 13-2 record in conference play but Drake is tied with Loyola Chicago in the loss column, as the Bulldogs are 11-2. The two teams have combined to win 40 games this season, through Sunday. Drake played both games against Loyola Chicago without senior Shanquan Hemphill, who’s the team’s leading scorer (14.1 points per game) and second-leading rebounder (6.3 rebounds per game), but fellow senior Tremell Murphy stepped up to score a game-high 17 points on nine shots on Sunday.

Both are playing with the NCAA tournament in mind and the two sides could have a rubber match in the Missouri Valley Conference tournament.

Even after Loyola Chicago’s loss Sunday, which ended an 11-game winning streak, the Ramblers have the No. 1 adjusted defensive efficiency in the country, according to kenpom.com. Drake ranks No. 22 defensively.

Nebraska gets back in the win column in the Big Ten

Before Sunday, Nebraska’s last Big Ten win came on Jan. 7, 2020, when the Huskers defeated Iowa 76-70 at home. Nebraska then lost its next 25 Big Ten regular season games, plus its opening game in the  Big Ten tournament last season against Indiana. On Sunday, the Huskers ended their drought against conference competition by defeating Penn State 62-61 on the road.