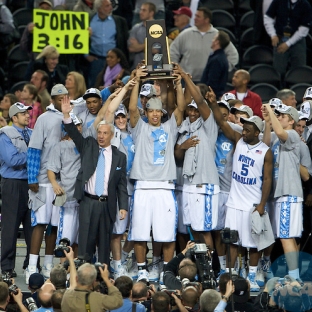 College basketball rankings: How do teams ranked in the preseason AP Top 25 fare in March Madness?

For the second year in a row, Duke will start the season as No. 1. The Blue Devils will certainly have a target on their backs this year, but they’ve got something going for them as well: No preseason No. 1 has ever failed to make the NCAA tournament.

Of the 25 teams ranked in the AP poll, the No. 1 is the only position that can claim that unblemished record. Still, of the 801 teams that have been ranked in the preseason since the NCAA tournament expanded to its modern format in 1985, 83.9 percent have made the tournament.


But those 1-5 teams also account for 71 of the 132 1-seeds in the tournament since 1985, an average of just over two of the four every year. They’ve also accounted for 18 of the 33 national champions, though really that’s just Nos. 1-4. Teams ranked No. 5 in the preseason poll have never managed to win the title in the NCAA tournament’s modern format (sorry Kentucky).

RELATED: Even unranked teams find success in the NCAA tournament

On average, teams ranked in the preseason Top 5 don’t find themselves with lower than a 5 seed come tournament time, though No. 2 and No. 3 have been seeded as low as 10.

Then No. 1s? Well they had an 8-seed in 2014 (Kentucky, which went on to lose in the national championship game), but two thirds of all preseason No. 1s entered March Madness as a 1-seed.

So, how have they performed once the tournament starts?


Preseason No. 1s have made it to the national championship 13 times since 1985, but only six of the 33 preseason No 1s have won the title bout (though that is more than any other preseason rank). The most recent of those came in 2009, when UNC went 34-4 and beat Michigan State for the crown.

But almost half (16 of 33) of the preseason No. 1s have failed to make it out of their regional, losing before the Final Four, so starting the year as top dog does not guarantee a trip to the national semifinals.

Still, it’s definitely not a bad place to be.