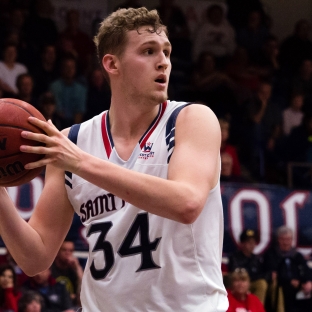 With the talent on Gonzaga’s roster last year, the Bulldogs had a one-season window to make a run at a national championship, which they fell just short of in April. Big man Przemek Karnowski was in his fifth and final year of eligibility after a back injury, and graduate tranfer guard Jordan Mathews arrived on campus knowing it’d be his last go-round. Nigel Williams-Goss and Zach Collins drew interest from the next level after their only seasons playing in Spokane, Wash.

The 2016-17 Bulldogs were arguably the greatest team in the history of the West Coast Conference but now it’s open for the taking. Here’s our preview of the conference, which we think will have a changing of the guard this season.

Incredibly, Saint Mary’s has two players named Jock on its roster this season who are a combined 14-feet and 515 pounds of force in the Gaels’ frontcourt. Jock Landale is a 6-11 center from Victoria, Australia, who was a finalist for the Kareem Abdul-Jabbar award, which is given annually to the country’s top center.

Step aside, Gonzaga. While it may come as a surprise to some casual basketball fans, Gonzaga is not expected to be the best team in the West Coast Conference despite playing for a national championship last season. That honor goes to Saint Mary’s, which returns its top three scorers, including Landale, from a Gaels team that went 29-5 (16-2 WCC) and earned a No. 7 seed in the NCAA tournament.

Three of their five losses were against Gonzaga, which has to replace more than half of its minutes played and roughly two-thirds of its scoring and rebounding. Saint Mary’s returns a pair of fifth-year seniors in guard Emmett Naar (9.4 ppg, 42.4% 3-point) and forward Calvin Hermanson (13.1 ppg, 43% 3-point) who will provide secondary scoring options and lethal outside shooting. The Gaels also add guard Cullen Neal, a redshirt senior transfer who averaged 9.4 points per game at Ole Miss last season.

Remarkably, BYU has beaten Gonzaga in each of the last four seasons, including road wins in Spokane the last three years. The Bulldogs have gone 80-8 in conference play during the last five regular seasons, so earning a head-to-head win over a conference power is the best way to climb up the standings.

“I look forward to watching this group early and seeing who rises up.” @BYUbasketball coach Dave Rose is excited for the rise. #WCChoops pic.twitter.com/xH5o75u13n

It also helps that the Cougars return a significant percentage of their rotation from last season. Yes, they’ll have to replace the production of Erik Mika (20.3 ppg, 9.2 rpg), who is a significant loss, but their next five leading scorers and three regular starters return. If TJ Haws (13.8 ppg, 40% 3-point), Nick Emery (13.1 ppg, 37% 3-point) and Yoeli Childs (9.3 ppg, 8.2 rpg) can take incremental steps forward in their development, BYU could push Saint Mary’s and Gonzaga this season.

Gonzaga isn’t afraid to redshirt players, especially freshmen, if it’ll help their long-term development but 6-6 wing Corey Kispert is talented enough that he can be an immediate contributor. He’ll provide size, strength and athleticism to the Bulldogs’ backcourt and at 215 pounds, he has the frame to handle the transition to the college level. The Edmonds, Wash., native also has a nice 3-point stroke.

Kispert ended his high school career by winning the last two Washington 1A state titles while averaging 23.9 points, 6.8 rebounds and 3.4 assists per game as a senior.