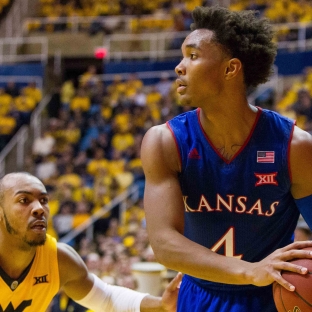 College basketball preview: Can anyone in the Big 12 end Kansas' impressive streak?

Six of the Big 12’s 10 teams made the NCAA tournament last season and eight schools were at least four games above .500 on the season. The four teams that failed to qualify for the Big Dance – TCU, Texas Tech, Oklahoma and Texas – are each poised to take a step forward this season, so how many Big 12 teams will make the tournament in 2018?

It appeared last season may have been the one where a Big 12 foe would unseat Kansas atop the conference standings but the Jayhawks won their final eight regular season games en route to winning the Big 12 by two games.

First off a disclaimer for Kansas and West Virginia fans: yes, Jayhawks guard Devonte’ Graham and Mountaineers guard Jevon Carter have strong cases for this distinction. Both players were members of the All-Big 12 Second Team, as was Carroll. Oklahoma State’s redshirt senior guard/forward became just the fourth player in conference history to finish in the top 10 in scoring, rebounding and 3-point percentage, joining Kevin Durant, Jordan Hamilton and Georges Niang.

What has helped turn @J30Carroll into one of college basketball’s best wings? Hard work and attention to detail. #letswork #okstate pic.twitter.com/DWf7nMSa2x

Carroll averaged 17.5 points and 6.6 rebounds per game while shooting 58.9 percent on twos and 44.4 percent on four 3-point attempts per game. He was one of two power conference players to improve his scoring average by more than nine points last season. While it’s unlikely, if not improbable, that the 6-6 Texas native’s scoring will take another big leap this winter, he’s the only one of the Cowboys’ top four scorers from a year ago to return, which means he’ll be relied on heavily this season.

The Jayhawks have won at least a share of the Big 12 regular season title since 2005, so we’re riding with Kansas until someone topples them. History is on the side of Kansas, sure, but so are basketball metrics given the incredibly talented assortment of players on the team’s roster.

Coach Bill Self returns a senior lead guard in Devonte’ Graham, an athletic guard in Lagerald Vick, a sharpshooting senior on the wing in Sviatoslav Mykhailiuk and a now-healthy 7-foot, 280-pound center in Udoka Azubuike, who suffered a season-ending wrist injury early in his fresman campaign last fall. The Jayhawks add Mississippi State transfer Malik Newman and a pair of highly touted freshmen: forward Billy Preston and guard Marcus Garrett.

As long as Bill Self is on the sidelines at Allen Fieldhouse, one of the most challenging arenas for opposing teams to leave with a win, Kansas is probably going to be the favorite in the Big 12, especially with as much talent as the Jayhawks have – both returning and incoming – this fall.

Is it possible for Texas, with one of the largest brands in college athletics and a history of annual NCAA tournament appearances, to be a sleeper? After the Longhorns finished at the bottom of the conference with an 11-22 record (4-14 Big 12), the answer is yes.

days until @TexasMBB Texas Tip-Off. Don’t miss your shot to see the team for free #ThisIsTexas

If all goes right for Texas this season, there’s a chance the team could double its win total from last season, if not finish with even more than 22 wins. A trio of guards makes up the team’s leading returning scorers – Tevin Mack (14.8 ppg), Andrew Jones (11.4 ppg) and Kerwin Roach Jr. (9.9 ppg) – and coach Shaka Smart assembled a five-man freshman class that is one of the most talented in the country.

Six-foot-11 forward Mo Bamba can be plugged into Texas’ starting frontcourt immediately and Matt Coleman is a lightning-fast point guard who could run the team’s offense in his first year in Austin.

Mo Bamba’s measurables make it seem like he was created in a lab. Listed at 6-11, he has a wingspan of 7-9 and a standing reach of 9-6. He has the physical tools to run the floor and be a game-changer on defense. Bamba projects to be a great rebounder in college and his feel around the rim should give Texas an inside presence on offense.

Catch Mo Bamba and the @texasmbb squad scrimmage at the Texas Tip-Off starting at 7P/CT on LHN. pic.twitter.com/wfUxZlEGhL