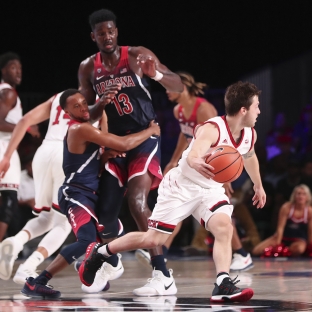 College basketball: NC State pulls off huge upset over No. 2 Arizona in the Battle 4 Atlantis

Don’t tell NC State that it’s not even Thanksgiving yet. In the Bahamas, the Wolfpack brought the madness to November, knocking off No. 2 Arizona 90-84.

NC State upsets the No. 2 Wildcats, 90-84, in the Battle 4 Atlantis quarterfinals behind 24 from Allerik Freeman. pic.twitter.com/6tZ5M0xj7X

The upset came in the quarterfinal round of the Battle 4 Atlantis, where NC State — tied with the Wildcats 40-40 at halftime — took a one point lead with almost nine minutes left and never trailed for the rest of the game.

The Wolfpack moved to 5-0 thanks to Allerik Freeman’s career-high 24 points, and another 20 from freshman Braxton Beverly.

Arizona had two of its own 20-point scorers in DeAndre Ayton (27) and Allonzo Trier (27), but it wasn’t enough against a Wolfpack team that shot 40 percent from beyond the arc, especially when the Wildcats were a dismal 12 percent from range (2-for-17). But somehow Arizona finished the game with more rebounds, fewer turnovers, and fewer fouls, but ended up on the losing side.

View the box score below: