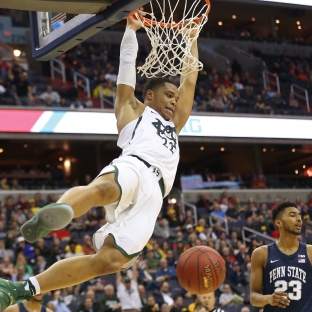 College basketball must-see TV team: Players who are a joy to watch

With the season set to tip off in less than two weeks, here’s five guys who will grab your attention each time you watch them play.

Villanova is a player development hub. DiVincenzo could be the next beneficiary.

That said, he does some things you can’t teach.

DiVincenzo is 6-5, 205 pounds, but he’s a remarkable athlete who players bigger than his listed size. The Wildcats have had crazy amounts of success in recent years, but that’s mainly a result of great coaching, continuity, discipline, shooting and defense. You don’t typically associate Villanova with leap-off-the-screen athleticism.

If DiVincenzo sees a bump in playing time this season, as he should, that is about to change.

We’re not sure what sums up his game more accurately: the first two plays of this clip (an effortless alley-oop dunk and a chasedown block), or the title.

Losing Josh Hart is going to hurt. He was arguably the best player in the country last season. But Villanova has a capable replacement in DiVincenzo, who can do just about everything on a basketball court. Watch the entire video above, and you’ll see it all. Big dunks. Big blocks. Mid-range jumpers, 3-pointers, hustle.

DiVincenzo needs to establish consistency. He had a solid year as a redshirt freshman, averaging 8.8 points and 3.8 rebounds on 47 percent shooting. But he would have great performances one game and be a non-factor in another.

However, consistency doesn’t necessarily make great television. DiVincenzo is a fun watch regardless, and with an increased role, people will take note.

Diallo has yet to play a minute of college basketball. But by all accounts, he’s electric. With a 44.5-inch vertical leap and a 6-11 wingspan, he has all the tools to wow crowds.

As a redshirt freshman, Diallo is a veteran (relatively speaking, of course) for Kentucky. De’Aaron Fox might have been the fastest player to ever don a Wildcat jersey; it’s between him and John Wall. Diallo doesn’t have those kind of end-to-end jets, but he could go down as the best vertical athlete Kentucky has ever had. Considering some of the guys who have played at Rupp Arena, that’s no small statement.

Diallo’s effectiveness hinges on his jump shot. We know what kind of athlete he is. If he can knock down 3s, that’s going to allow his explosiveness to be even more impactful. It was just an exhibition game, but Diallo looked comfortable from behind the arc here, and made his usual bunch of athletic plays:

Most years, Kentucky is a must-see TV team. Plenty of the young Wildcats could have made this list. But Diallo can do things 99 percent of players simply can’t.

It speaks volumes about Gonzaga’s overall talent last year that Hachimura only played 128 minutes. The Bulldogs’ backups had awesome backups. But after losing Nigel Williams-Goss, Zach Collins, Przemek Karnowski and Jordan Mathews, Hachimura will see much more time this season.

He’s the best athlete on the team and one of the best in the country. Any player who can do this:

Is special. That’s usually an either/or proposition. Like DiVincenzo, Hachimura is capable of doing just about everything there is to do on the court, only he’s bigger. At 6-8, 225 pounds, he has a chance to be able to guard every position.

There’s not much we can glean from last year’s numbers. Too small of a sample size. But it’s worth nothing that Hachimura shot less than 30 percent from 3 and, more importantly, less than 60 percent from the free-throw line. He’s going to be an effective player regardless of his jumper. But if that part of his game catches up to the rest of it, he could be a star.

For now, we’ll settle for a guy who can grab a rebound, go coast-to-coast, and throw down a vicious dunk or throw a nifty no-look pass to a streaking teammate. On the next possession, he might swat a guard’s shot into the third row. Gonzaga might not win as much as it did last year, but don’t expect some massive drop off.

Bridges might be the best and most entertaining player in the country. We can’t wait to watch him.

He’s equal parts substance and style. Of course, he’s immensely productive. Bridges averaged 16.9 points, 8.3 rebounds, 2.1 assists and 1.5 blocks on 49 percent from the field. He also made 39 percent of his 3s. For a guy who was considered a shaky jump-shooter going into college, he silenced plenty of critics.

Those numbers should only rise as a sophomore.

And, of course, you can count on Bridges throwing down at least one thunderous slam per game, if not more:

The sheer power of Bridges’ dunks is impressive. Usually, the best vertical athletes don’t carry much bulk. That allows them to glide through the air effortlessly.

There is plenty of effort involved in everything Bridges does, so in that sense, he’s different than other elite athletes. He doesn’t really make it look easy. But it always looks awesome. He’s built like a truck – the 6-7, 225 pounder is faster and stronger than just about all of his counterparts.

Bridges is skilled, too. Combine that with his combination of strength and explosiveness, and you could have the next Naismith winner.

Lammers isn’t a physical specimen like the other guys on this team. He’s a good athlete, but not a great one. However, there’s just an art to the way he plays. Simply put, he’s complete.

The stats speak for themselves: he averaged 14.2 points, 9.2 rebounds, 2.1 assists 3.4 blocks and 1.2 steals per game as a junior. He’s kind of the Marc Gasol of college hoops. Gasol is massive, skilled and smart. His teams always tend to outperform expectations.

Lammers was the same way the last year, guiding Georgia Tech to a surprisingly solid season.

The highlight reel below illustrates his all-around greatness. Lammers is a two-way player in every sense of the phrase. He looks as smooth stifling foes at the rim as he does stepping out and hitting mid-range jumpers.

As usual, the ACC is loaded. Georgia Tech merited bubble consideration last year. If Lammers can take another leap, the Yellow Jackets could be dancing in 2018.