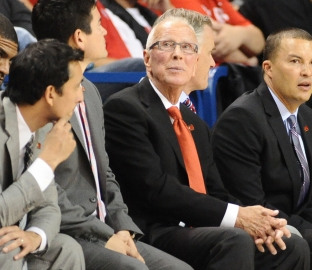 SAN DIEGO — The Mountain West Board of Directors approved the recommendation by the league’s men’s basketball head coaches to name the conference’s top coaching honor after former San Diego State head coach Steve Fisher, who retired in April. The recipient of the award, beginning in 2017-18, will be the Steve Fisher Coach of the Year.

Fisher, who guided the Aztecs to a 386-209 record in 18 seasons, led SDSU to a Mountain West-record 10 conference titles, eight NCAA tournaments and 13 postseason appearances. Along the way, Fisher picked up his second career national coach-of-the-year award (Naismith, NABC, Adolph Rupp) in 2011 when San Diego State reached the NCAA Sweet 16, finished with a school-record 34 victories and was ranked as high as No. 4 nationally.

NEWS: The all-time winningest coach in @MW_MBB, @aztec_mbb‘s Steve Fisher will be the namesake for @MountainWest Coach of the Year award! pic.twitter.com/UiqpC4dkAp

The all-time winningest coach in San Diego State and MW history reached the Sweet 16 once more, in 2014, when the Aztecs finished with a 31-5 record. That year’s effort, which saw SDSU reach No. 5 in the national rankings, was one of 12 seasons of at least 20 wins. Then in 2015, Fisher was the recipient of the John R. Wooden Legends of Coaching Award.

The league’s decision to name a postseason award after a former San Diego State head coach is not unprecedented. In September of 2014, the Mountain West named its baseball player-of-the-year award after Tony Gwynn, who was the baseball head coach from 2002-14 and lettered in the sport in 1979, 1980 and 1981. Gwynn also earned varsity letters in basketball four times (1978-81) and is the school’s all-time assist leader (590). This past season, SDSU baseball shortstop Danny Sheehan was the 2017 Tony Gwynn Co-Player of the Year, marking the first time an Aztec has won the award.