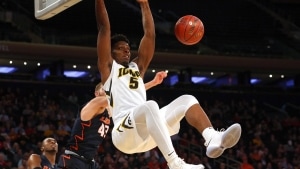 The Hawkeyes were in the top 50 in points per game at just under 80 last season.

They shot the ball well from every part of the floor. And they shared it, dishing out a fourth-best 18.2 assists a game.

But at times it felt like they couldn’t stop anybody.

And that’s why the Hawkeyes lost 19 games, won only four in the Big Ten and averaged 78.7 points a game.

Something had to be done in the offseason. The top nine scorers returned, including potential Big Ten player of the year Tyler Cook.

Iowa’s @iamtc25 is one of four #Hawkeyes over the past five years to be invited to the prestigious Nike Basketball Academy: https://t.co/d3LXIqDNwi pic.twitter.com/iuuj76KrmM

But if the Hawkeyes didn’t become more of a defensive team by the start of the season, than they weren’t going to win.

Iowa coach Fran McCaffery, who has always been an offensive-minded coach, said on the latest March Madness 365 podcast that he needed complete buy in from the team.

He said offseason practices weren’t as much fun.

“We always relied on our ability to get buckets,’’ said McCaffery. “We still got buckets and still lost 19 games.’’

McCaffery said the players realized that they had to take pride on defense. The change had to happen, not just in the drill and station work, but also in the weight room.

He said the Hawkeyes were connected offensively, but weren’t defensively.

If the Hawkeyes get it, and actually defend, then there is a reason for optimism.

👀 Iowa’s where and when during the #B1G schedule in 2018-19. #Hawkeyes pic.twitter.com/qQqOmOhMjj

Cook could be something special. He averaged 15 points and six boards last season. McCaffery expects even more this time around.

And if the numbers go up as expected, he said Cook, “can be a player of the year candidate.’’

McCaffery said the Hawkeyes have depth in the backcourt that they didn’t have last season, too.

But so much of the Hawkeyes’ optimism and expectation could come down a few week stretch when Iowa plays Oregon, and then either Syracuse or UConn in New York followed by a three-game stretch two weeks later against Wisconsin, at Michigan State and rival Iowa State.

Georgetown coach Patrick Ewing also joined the podcast, discussing his level of optimism in year two, especially with big man Jessie Govan (17.9 ppg, 10 rpg). He said Govan was the hardest to crack that he can’t just be a face-the-basket scorer. Ewing discussed the returning players, whom he said are all expected to take that next step. He also went into detail about his Georgetown playing career and the coaches who helped influence him in his coaching career.

Current Chicago Bulls forward Lauri Markkanen also was on the podcast and retold a story about how the late Sen. John McCain helped him with his visa from Finland so he could play at the University of Arizona.