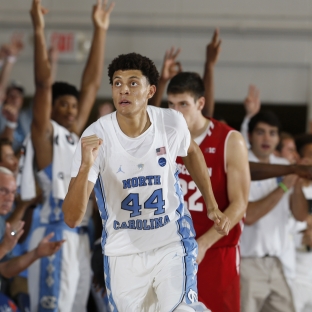 As we dive into one of the most fun weeks on the college basketball calendar, a fair question arises: does winning a Thanksgiving tournament really matter?

But recent history suggests that we can learn plenty from these Thanksgiving events, even if the real madness if months away.

A quick disclaimer: not all tournament championships are created equal. For example, it’s going to be harder to win this year’s PK-80 Phil Invitational (eight teams in each bracket) than it will be to win the Hall of Fame Classic (four teams).

With that said, the last 14 national champions have generally dominated Thanksgiving week. Check it out:

Winning the NCAA tournament isn’t the only way to be “successful” in March Madness – for most schools, anyway. Success is relative. For some programs, making the NCAA tournament can be deemed a success, regardless of what happens when they’re there. For others, making it to the second weekend is a huge accomplishment. And for some, of course, it really is national title or bust.

With that in mind, we researched the winners of the Battle 4 Atlantis and the Maui Invitational in recent years and noted what they did in the NCAA tournament. We chose those two tournaments because they each have eight teams in the field instead of four, and lately, they’ve had the most talent from top to bottom (note: this is the first year of the PK80, but it has the best crop in 2017).

Anyway, here’s how the Atlantis winners have fared:

Of course, winning these tournaments doesn’t guarantee anything. But if nothing else, you’re a near lock to make it to the NCAA tournament, and you’ll usually win at least a couple of games while there.

For instance – that Syracuse run in 2016 seemingly came out of nowhere. But the Orange started out well that year, winning the Battle 4 Atlantis. Harvard is the only school on this list not to win an NCAA tournament game in the same year.

Now, a look at Maui:

Dominating a tournament in November doesn’t mean you’ll do the same in March. But, these Thanksgiving events allow us to see what these teams look like in a tournament atmosphere.

Maybe these schools win in November and March because they’re just good. Or, it’s a combination of the two. These are really good teams that elevate themselves a notch in a win-or-go-home environment.

One thing we can all agree on: this is going to be such a fun week.