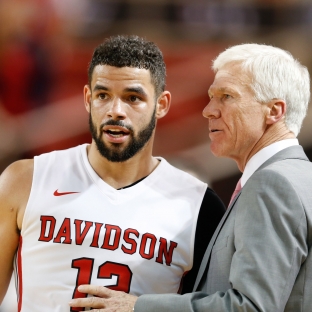 College basketball: Davidson traveling to Italy, Slovenia for some culture and hoops

Davidson coach Bob McKilliop is no newcomer to international basketball. He was traveling to Italy summers in the 1980s, when still a Long Island high school coach.

That put him ahead of the curve when it came to recruiting players worldwide. The college he works for values travel as education, and that has created a synergy between academia and athletics.

The Wildcats will travel to Italy and Slovenia this month, playing exhibitions against European pro clubs. The NCAA allows a program to make this sort of trip every four years.

“This is a substitute for junior year abroad,” McKillop said of the path Davidson students generally take.

The primary requirement to get NCAA approval for these trips is to leave the United States. Some programs go to Canada or the Bahamas or Mexico. The Wildcats will see the Italian Alps and Venice on the sea.

“We want this to be about seeing the world. Understanding immigration in a place like Italy. Unless you see that first-hand, what really occurs, I’m not sure it’s the same. This is an eye-opening experience for our guys.”

It’s also a bonding exercise, similar to when the Charlotte Hornets went to China for two exhibitions during the 2015 preseason.

“They have to depend on each other to communicate,” McKillop said of foreign travel. “They learn how to order off a menu (in another language). I speak enough Italian to get by.

“This creates true intimacy with each other” as teammates.

McKillop has gone global with his recruiting for a long time. Thirty-five players from 20 countries outside the U.S. have played for the Wildcats since McKillop became coach in 1989.

McKillop said Davidson’s international basketball connection was 32 years in the making. He did clinics overseas as early as 1980. Some of the coaches he met back then have risen significantly in their various countries.

“Some national-team coaches,” McKillop said. “We grew relationships there over the years and it’s been good for everyone.”

Included in that balance is Davidson’s academic mission.

The other benefit of these trips is a head start on preparation for the season: The Wildcats can practice before they depart for Europe, and their exhibitions will be against pros: Club-team players from Italy and Slovenia and Monaco’s national team.

“We’re talking about 25-28-30-year-old men,” McKillop said of the competition. “They’re crafty and strong” compared to most college players.

The results are clear: McKillop said four of the five times the Wildcats took a summer trip abroad, Davidson went on to reach the post-season, either in the NCAA tournament or the NIT.

This article is written by Rick Bonnell from The Charlotte Observer and was legally licensed via the Tribune Content Agency through the NewsCred publisher network. Please direct all licensing questions to legal@newscred.com.