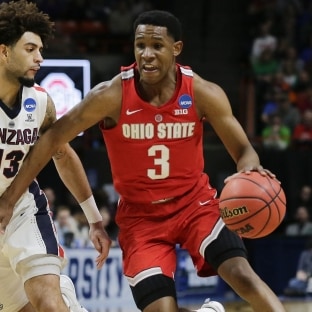 
Here’s the checklist for Ohio State basketball this summer:

And it’s all doable.

The Buckeyes were one of the surprise teams last season, challenging for the Big Ten title, winning 25 games and producing the Big Ten player of the year in Keita Bates-Diop. All of that happened in Chris Holtmann’s first season on the job after the Buckeyes pulled off the coup of landing the former Butler coach last June.

“There’s a lot of opportunity for new leadership, a lot of guys will take on new roles,’’ said senior guard C.J. Jackson. “Some of the guys aren’t used to being so vocal but were just leading by example.’’

Jackson said the new gigs are wide open and the players will fend for them during 10 practices, offseason conditioning and workouts in advance of an August trip to Spain.

Remember, the Buckeyes leaned heavily on Bates-Diop, Jae’Sean Tate and Andrew Dakich last season to bail them out of a hole, or simply produce in the cases of Bates-Diop and Tate.

“It’s not a secret that we lost a lot in terms of both leadership and production on the floor,’’ Holtmann said. “We’re trying to figure it all out. I’m anxious to see how these guys (notably Jackson, Wesson and Lane) handle it. It was clear who were the leaders when I got the job.’’

Jackson is the top returning scorer at 12.6 a game, followed by Kaleb Wesson.

“Kaleb has to be an important guy for us, and his usage and shot volumes will increase,’’ Holtmann said. “I think his brother Andre could see his production increase as well. C.J. had an outstanding junior season.’’

Holtmann rattled off important players who he’s intrigued to see develop over the next month in sophomore Kyle Young, graduate transfer Keyshawn Woods from Wake Forest (Dakich was a huge success in this role last season from Michigan), and the four freshmen who he said have to leave an imprint on this team: 6-9 Jaedon Ledee, 6-3 Duane Washington and 6-3 Luther Muhammad. Add in returning bigs Micah Potter and wing Musa Jallow and the pieces are all in place for the Buckeyes to be a surprise yet again.

MORE: 5 coaching hires who will have the biggest impacts | Vote for all-time starting fives

“For everyone coming back we’ve got one year down with (Holtmann),’’ said Jackson. “He’s a guy we don’t have to talk just basketball with. He makes it real. We call connect with him.’’

That’s a view shared by Holtmann’s coaching colleagues in the sport. Holtmann embraced the Butler way even though he wasn’t part of the Butler feeder system for long. He has been an immediate hit at Ohio State too, which shouldn’t be a shock to anyone who knows him. During last season, Tate said he was thankful to Ohio State athletic director Gene Smith for hiring Holtmann, something that isn’t often uttered by players.

And give Holtmann credit for also being willing to reopen Cincinnati’s on-campus arena for the season (with a return game to Columbus in 2019). Playing at Creighton and hosting Syracuse in the Gavitt Games and ACC-Big Ten Challenge also provide two games that will push this team. Oh, and the Buckeyes also play UCLA in Chicago.

“We’ll see how smart it was to put together a challenging schedule,’’ Holtmann said. “We’ll be in some incredible road environments (in Cincinnati and Creighton).’’

Holtmann said few understood just how good Tate and Bates-Diop were going to be last season. He went into the season with an open mind and hasn’t changed one bit.

“We certainly have questions to answer,’’ Holtmann said. “We will have increases in roles and new leaders, and it’s up to us coaches to mold it together. We’ve got work to do.’’