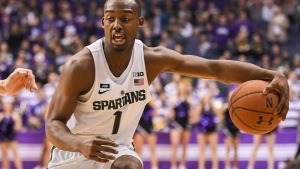 
You know these guys if you watched college basketball closely last year, but expect them to be even more prominent in 2018-19.

Here are six breakout candidates for the coming season.

Langford is the prototypical two-guard in today’s game. He’s a three-dimensional scorer who can shoot from deep, mid-range and get to the rim. Langford was a role player as a freshman and sophomore, but Michigan State will need him to shoot more as a junior.

He does that well. Langford drained 40.4 percent of his 3s as a sophomore and 41.6 percent as a freshman. He’s not the most explosive athlete but has nice positional size (6-5) and has enough shake to separate from defenders off of screens.

Now, we mentioned before that Langford can get to the rim. That’s true, but he needs to improve his dribble-drive game. Langford was uber-efficient from deep last year, but he only shot 42.9 percent overall. His floater game is developing, but could use some refinement. Langford can beat defenders off the bounce but he doesn’t always know what to do once he arrives in the lane.

Langford is going to have way more scoring opportunities with Miles Bridges and Jaren Jackson gone, though. He seems up to the task based on what he’s shown thus far.

Washington’s situation is different than Langford’s. Kentucky is more talented than Michigan State. Washington might get more shots; he might not. The Wildcats will likely pair him in the fronctourt with Reid Travis, who averaged 19.5 points for Stanford last year.

But Washington improved rapidly as last season rolled on. He scored in double figures 11 of his last 12 games; the seven games before that, he only did it once.

Washington’s volume may or may not ramp up, but he’s going to have more space this season thanks to all the shooting Kentucky added. That bodes well for his game. Washington is an old-school forward whose primary goal is to get to the rim at will. It’s impressive that he averaged 10.8 points as a freshman despite the Wildcats’ rough spacing.

Expect him to be more efficient with more room to operate. He shot 52 percent last year, but don’t be surprised if he approaches 60 as a sophomore.

It’s usually wise to pick a breakout candidate off of a Chris Holtmann-led team. Keita Bates-Diop exploded last year. The Buckeyes were one of the most pleasantly surprising teams in college basketball, but they lost a lot in the offseason.

Jackson is the most important piece who returns. He averaged 12.6 points on 41.6 percent shooting and 37.9 percent from 3. Ohio State welcomes talented recruits and transfers, but it feels like Jackson will be a primary offensive option.

He’s small, but other than that, Jackson has plenty going for him. His pull-up 3 is legitimate and he beats defenders off the dribble with ease. Jackson averaged 3.9 assists as a sophomore, a solid clip for a guy who was sharing the ball-handling duties. He could average something like 15 points and five assists as a junior.

Paschall was an overqualified fifth starter on Villanova’s national championship team. With Jalen Brunson, Mikal Bridges, Omari Spellman and Donte DiVincenzo out of the picture, he’ll be featured more prominently.

MORE: Why Paschall can be Nova’s next star

He seems ready for a bigger role. Paschall averaged 10.6 points on 53.3 percent shooting last year and can do a little bit of everything offensively. And we know Jay Wright’s player development track record is pristine. Bridges and DiVincenzo are examples of role players who blossomed into stars.

Now, some guys are just meant to be role players. Expand their volume, and their games are exposed. But what’s remarkable about Villanova is that time and time again, we haven’t seen that. Brunson, Bridges, Josh Hart and plenty of others haven’t sacrificed efficiency as they’ve taken on more volume.There are plenty of reasons to be optimistic about Paschall.

Poole is a bit of an enigma, but his talent is obvious. Athletic wings who can shoot are the hardest players to find in college basketball, and Poole fits that mold. He jolted the Michigan offense several times last year when it needed jolting. Poole only played 12.2 minutes per game, but averaged six points and shot 37 percent from 3.

And he’ll have more opportunities as a sophomore. Duncan Robinson and Muhammad Ali Abdur-Rahkman are gone. Poole needs to improve his defense and shot selection, but there’s an awesome player somewhere within him. He has a chance to become a huge part of the Wolverines’ success.

A cult hero from last year’s Final Four run, Krutwig returns and figures to be an absolute terror in the post.

He averaged 17.8 points and 10.4 rebounds per 40 minutes as a freshman. Aundre Jackson is gone, so Krutwig should play even more as a sophomore. While the center position is evolving, Krutwig is a throwback in the most beautiful way. He establishes post position, catches the ball from a guard, and goes to work. Loyola’s advanced spacing concepts help Krutwig breathe.

Of course, there are areas in which Krutwig needs to improve. He struggles to defend ball screens, and while he’s solid defensively, he’s not an ace rim-protector.

But he’s playing in the Missouri Valley Conference. His combination of size and touch is going to earn him a lot of points and a lot of rebounds on a team that should run through the league.