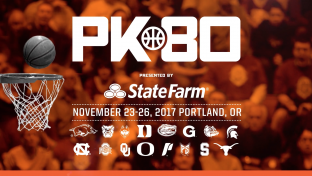 What do college basketball fans do when the offseason has them feeling a bit down? Exactly, look ahead to all the tipoff action just a few short months away.

And that’s just what college basketball faithful can do now that ESPN has released the brackets for the PK80 Invitational — a 16-team tournament set to honor Nike co-founder and University of Oregon alumni Phil Knight.

Brackets have been revealed! Who does your team play? #PK80

A few matchups jump out from the intial lines of the Victory Bracket, including a matchup between Michigan State (led by Miles Bridges) and Georgetown (coached by first-year head coach Patrick Ewing) as well as a contest that pits Oregon against UConn.

There could also be a potential NCAA Tournament rematch between Arkansas and North Carolina if both teams move past their first round foe (Oklahoma and Portland, respectively). North Carolina bested Arkansas 72-65 in a second round bout in the 2017 South Regional.

As far as the Motion Bracket goes, Duke, Florida and National Runner-up Gonzaga headline a group that also includes Texas, Butler and Ohio State. First round matchups will see OSU against the Zags, Florida versus Stanford, and Butler squaring off against Texas. Some tasty pairing could ensue in the second round and beyond, so keep your fingers crossed college basketball faithful.

The tournament format calls for two eight-team brackets where each team will play three games before two bracket champions are crowned. All games will be televised on ESPN’s family of networks.

With a field of 16 teams, the PK80 will be one of the largest regular-season tournaments in college basketball history, ESPN said. Games are set to be split between the Rose Quarter’s Moda Center and Veterans Memorial Coliseum

Excited to be apart of this once in a lifetime event! We will take on @GeorgetownHoops in the first round of the #PK80 at the @ModaCenter. pic.twitter.com/TWrPfXdrFO