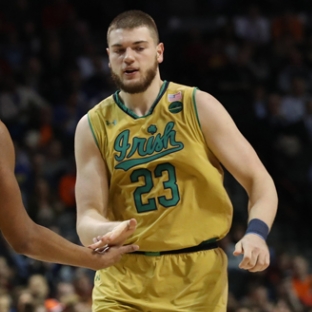 SOUTH BEND — Solid steps of success are difficult to determine in one-sided exhibition games the way this one was, but a Notre Dame big man took a big one Friday at Purcell Pavilion.

Way back in the summer, before he helped his native Lithuania earn a gold medal at the World University Games, back before he could show fans around here that this year can indeed be different for him and his game, senior power forward Martinas Geben made a promise.

To himself. To his coaches. To his teammates.

MORE: Why ‘8’ is the key to our early March Madness predictions

He was going to play the best basketball of his career this season. No more looking over the shoulder at his head coach. No more wondering if he might soon be headed back to the bench after a missed shot or rebound or assignment. No more fighting himself over a confidence that would blow in like the region’s lake-effect snow.

This year, Geben promised in June, would be different. In a good way. In his best way.

For one night, it was.

Geben erupted for a game-high 20 points with 11 rebounds, both of which would have been career bests had this been a contest that mattered in the won-loss department, as Notre Dame coasted to a 97-57 victory over Holy Cross, an NAIA school located right across 933 in an exhibition that was only recently thrown together to help raise funds for hurricane relief.

Great to put on the uniforms and compete

First step toward our goals this season.

“Knowing who we’re playing against, knowing there’s nobody nearly as big as me and knowing nobody should be able to guard me,” Geben said. “I just tried to capitalize tonight.”

Starting nobody taller than 6-foot-6, the Saints simply had zero answers for the 6-10, 252-pound Geben. He made seven of his eight shots from the floor, converted all six free throws and added two assists and a blocked shot in 23 minutes.

“That’s how he’s practiced,” said coach Mike Brey. “He’s more decisive with his posts moves. He’s getting into them quicker. His shooting percentages have been high.

“His body language is different. My goal is to not mess that up.”

The only aspect of Geben’s game that was wrong unfolded in the second half. He rolled hard to the hoop after setting a screen, took a pass from Rex Pflueger and delivered a two-handed dunk. Following through on it, Geben smacked his right hand hard and loud against the backboard. That’s a no-no in the college game, so Geben was promptly popped for a technical foul.

Afterward, he feigned frustration with the officials. He joked that they’re still out to get him. For illegal screens, For physical play. For something. For anything. On Friday, it was the backboard slap. He can’t seem to catch a break.

“This year, I cleaned up my act,” Geben said. “My screens are great, so now they’re calling a tech when I slap the backboard.”

Truth told, it was a pretty mean smack.

Geben’s also excited at where he might take his game this season. Late Friday, he insisted he’s ready to take on all comers in the Atlantic Coast Conference. Duke. North Carolina. Bring ’em on. Today.

It may have just been an exhibition against an overmatched opponent, but the way Geben worked, he felt good about walking out of the arena feeling good about his game. Finally.

“You gotta start somewhere,” Geben said. “If you play well in an exhibition against a lower-caliber teams, that gives you the confidence to carry through against bigger, badder teams.”

Geben wasn’t the only Irish feeling good about his work Friday. Pflueger did a little of everything in going for 18 points, eight rebounds, five assists, two blocks and three steals in 29 minutes. They were 29 hard minutes. Brey figured he’d have to give the guy Saturday off to recover.

What number did Pflueger best like on his final stat line?

As in no turnovers. He played at a high level. He ran the team for some stretches, yet he still took care of the ball. Did it last year. Should do it even more this year.

“Coach Brey has always been on me about taking care of the ball,” Pflueger said. “Just emphasizing every possession as an important possession.”

Pflueger then referenced a poster that he said Brey has hanging somewhere on the basketball office walls. It says Don’t Skip Class and Don’t Turn over the ball and we’ll be getting along just fine.

Words that this program has lived by for a long time.

MORE: Can anyone in the Big 12 end Kansas’ impressive streak? | Pac-12 preview

What’s often not the story about Notre Dame basketball — at least for extended stretches over a season’s six months — is defense. As in the Irish may be good defensively for a half or a game or a week, but then, they fall back on relying on being able to score it better than the opposition.

It was different Friday. The Irish labored at times to flow on offense, but they were good defensively from the jump.

Pflueger overplayed the passing lane on the Saints’ first possession and knocked the ball into the far sideline press table. Later, he came from one side of the lane to the other to punch another possible pass into the first row of seats.

“I love to jump passing lanes,” said Pflueger, who helped the Irish finish with eight steals and 11 forced turnovers. “I was a little too jumpy tonight. We definitely have a great chance of being special on the defensive end.”

Notre Dame held Holy Cross to 34.4 percent from the floor, 20.7 percent from 3 and finished with 39 defensive rebounds.

Former Riley standout Ja’mare Washington figured he’d have around 50 family members and friends in the stands for this one, and promised they’d be heard. They were. Washington gave them plenty to cheer. He finished with a team-high 14 points.

Notre Dame was without a pair of power forwards. Graduate student Austin Torres continues to recover from a stress fracture in his left leg while sophomore John Mooney sat out after a violation of team rules.

This article is written by Tom Noie from South Bend Tribune, Ind. and was legally licensed via the Tribune Content Agency through the NewsCred publisher network. Please direct all licensing questions to legal@newscred.com.